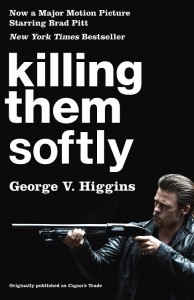 This is definitely a vintage crime novel. It’s got an old-fashioned feel to it from the very first chapter. No cell phones, no computers, no fancy hardware, just guys with guns figuring out what other guys are gonna do. In general, I like those kinds of stories and there is a lot to like about Killing Them Softly

by George V. Higgins (originally titled Cogan’s Trade). I picked this up in the airport bookstore and figured it would be a good way to pass the time on the plane. (I admit it. I had 3 other books in my carry-on, but this one appealed to me right off the shelf. Don’t ever let anyone tell you cover art doesn’t matter.)

The book is full of action and violence, just as a good noir crime novel should be. Johnny Amato is planning a job and he’s got a fool-proof plan. All he needs are the right guys, guys who can keep their heads and not mess it up. He enlists Frankie and Russell to rip off a mob poker game — a pretty ballsy plan, since the mob has a very long memory, but Amato has a fall-guy in mind and he thinks they can pull it off. What he doesn’t count on is Jackie Cogan — a mob enforcer who sees the subtleties that others miss. He’s not afraid to put pressure on people and he’s ruthless. Not someone you want to have after you.

I enjoyed this; there’s a good mystery, a lot of action, a couple of interesting plot twists. I found the language a bit of a slog, I have to say. It’s like it’s all in gangster-speak and you have to translate every sentence.

“‘Remember them habes we had?’ Frankie said.

“Habes? What habes? We had about nine hundred habes. Every time I turn around that monkey’s pulling out something I gotta sign. What habes?'”

Took me a few readings to figure out they were referring to writs of habeas corpus. Guess I’m not up on my old-school gangster slang.

There is also an oddity about the way they speak, repeating their words – “I’m gonna, I’m gonna go do this thing” — that everyone does in the book. Perhaps a local mannerism, but it was odd and hard on my ears as I was reading it. It’s tough when you’re enjoying the story, but the language and the style make for difficult reading. I must say that I loved some of the back-chatter — the guys talking about their wives and their money problems and their girlfriends. That made me laugh and seemed very realistic. Just the sort of thing you’d talk about, stuck in a car, waiting for a guy.

Overall, it’s a quick read and a good pick for folks who like tough guys and guns (and really, who doesn’t like tough guys and guns?). And here’s something you won’t often hear me say: the movie looks better than the book. Some books are just screaming to be movies and this is one of them. I like Brad Pitt and there’s a great cast around him in this; I could place the characters just by looking at the actors, no introductions necessary. Definitely going to be fun to watch.

My copy of Killing Them Softly

came from a bookstore in the Atlanta airport. The movie is scheduled for release in November, 2012.

4 comments for “Review: Killing Them Softly by George V. Higgins”