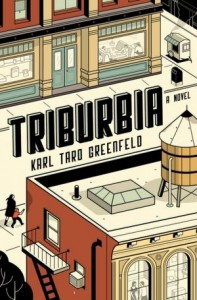 I think I’m over the whole “novel told in stories” idea. I tried not to let that influence me when I read Triburbia

by Karl Taro Greenfeld. It’s a decent novel. It meanders a bit, tells the stories of the lives of a group of Tribeca residents. The stories are identified by address, with a lot of overlap and some surprising revelations about their residents.

The novel starts with a group of fathers, an informal breakfast club that meets after walking their kids to school. There has been a incident involving a young girl and a child molester, and one of the fathers feels singled out. The police sketch looks a bit like him, if you squint the right way, and suddenly people are staring. They’re too polite to come right out and say anything, but he is certain of what they’re thinking.

The stories are generally pretty interesting. The residents of this neighborhood are a mixed bunch — old money, new money, different careers. Mostly artistic types, but artists with money, not the starving type. A lot of money and privilege.

What struck me about the book is that, a week after reading it, I can’t recall the name of a single character. I recall the story about the child molester, an entrepreneurial young woman who found a novel way to raise her college tuition, and a complicated story that had a woman leaving her stoned husband somewhere in Spain, I think. Oh — the marijuana. They smoked a lot of pot in this book. No adults I know smoke that much dope. We have jobs and lives and stuff.

It also struck me as a novel for New Yorkers. When you say “Tribeca” to me, I don’t have a reaction. I know it’s a neighborhood in New York City, but it doesn’t mean anything to me. Maybe if I had an emotional connection to the neighborhood, or if I came into the novel with some sort of expectation about the residents, it would have had more impact.