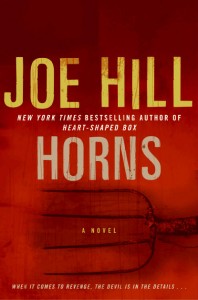 Ignatius Perrish spent the night drunk and doing terrible things. He woke up the next morning with a thunderous hangover, a raging headache…and a pair of horns growing from his temples.

It’s a great beginning to a promising story: part thriller, part horror, part treatise on the nature of the devil. While Horns occasionally gets bogged down in reminiscence, it’s still an extremely entertaining read.

A year ago, Ig’s girlfriend Merrin was raped and murdered. Ig was the prime suspect — an alibi like “I was passed out in my car parked behind an abandoned Dunkin Donuts” is not very convincing — and although he was never charged, he was also never cleared. There is a cloud of suspicion hanging over him already, and growing horns is not going to make him look innocent.

Eventually, Ig discovers that the horns have their own terrible power. They make people want to tell him things, the things they really want to do. They want to get his permission, or his twisted blessing. When he gets rousted by the local cops, he learns a little more about Officer Posada than he intended:

“I’d like to put my hand in your pocket again,” Posada said. “And leave it there. You don’t know how hard it is not to use my position of power to cop a feel. No pun intended. Cop. Ha. I never imagined how much of my job would involve handcuffing fit, half-naked men.”

You’re not going to believe the advice he gets from his parish priest.

Ig finds out things he wishes he didn’t know, but he also sees a way to use this power, this ability to get answers from people, to find out who really killed Merrin. The parts of the story that involve Ig’s investigation are my favorites — filled with insights into the people around him that are both hilarious and horrifying. We really do not want to know what goes on in the minds of the people around us.

The story, for me, got bogged down in backstory. Some explanation of how Ig and Merrin got together, his relationship with his brother and his best friend, Lee, is necessary, but I didn’t find it very compelling. When a story starts in the present then jumps back to the past for an extended period, it’s hard to keep up the level of interest.

I’m also sure that some of the symbolism went right over my head (I never did figure out the whole Treehouse of the Mind thing), but I loved the commentary on the nature of the devil. Some of the ideas Ig lays out are the sort of questions I used to ask my very-Catholic grandmother, driving her to distraction; for example, if God hates sin and the Devil punishes sinners, aren’t they working on the same side? Seems perfectly logical to me. I’m sure that a lot of readers can relate to the comments about God and his “criminal indifference”. After all, who hasn’t watched a tragedy unfold and asked “why?”

“If you were in a boat and did not save a drowning man, you would burn in Hell for certain; yet God, in His wisdom, feels no need to use His power to save anyone from a single moment of suffering, and in spite of his inaction He is celebrated and revered. Show me the moral logic in it. You can’t. There is none.”

I enjoyed Horns, but not quite as much as I had hoped to. I found a lot of humor and suspense in the story, a couple of good scares and a lot of little touches that made it memorable. (Just for fun, take a minute to translate the Morse code on the inside cover — I got a chuckle out of it.) Author Joe Hill is the son of Stephen King and storytelling is definitely a family gift. I loved 20th Century Ghosts and I also enjoyed Heart-Shaped Box and I will be looking forward to his next novel — a good, scary story is hard to come by.

My copy of Horns was provided free of charge for review.