The Hero(ine) of Romeo and Juliet? 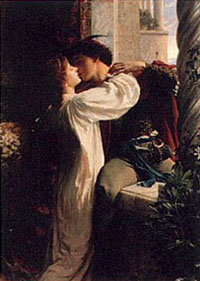 Okay, folks! This is my first post from the good folks at Shmoop – a little romance for a Monday morning. What do you think? Be sure to comment or email and let me know!

The Hero(ine) of Romeo and Juliet?

We tend to think of Romeo and Juliet and equals. They’re star-crossed lovers. They die together. They’re an item. If we had to choose one character as more important, the fact that Romeo is far more active would probably give him the winning edge. However, a lot of scholars think that Juliet is the real powerhouse of the play. How’s that, you ask? Let’s go over the facts.

There’s no getting around the fact that Romeo’s active presence makes him seem like the play’s driving force. To set the mood for his relative social mobility, the story opens on Romeo and his friends no-gooding around town and making dirty jokes. From there, we follow Romeo to the party where he meets Juliet; in other words, Juliet doesn’t exist for the audience until she exists for Romeo. It’s Romeo who climbs the balcony and Romeo who first takes his own life when things go south. Sure, all these things might make him seem like a real mover and shaker, but then again, it’s pretty easy to gallivant about town when you’re an upper-class male approaching your twenties in old-timey Verona.

Juliet, on the other hand, is a thirteen-year-old girl under the watchful eye of the entire Capulet household, not to mention all of good society. If she comes across as passive, it’s probably because she’s meant to; the fact that she rarely gets a scene to herself without her mom, dad, nurse, or fiancée butting in only speaks to the sheer audacity of her betrayal. Yes, Romeo offers to deny his father without hesitation, but considering that Lord Montague’s appearance in the play might as well be a cameo, the audience hardly feels the weight of this gesture. Faking your own death to pull a fast one on a household designed to control you? Now THAT takes moxy.

Of course, let’s not forget that the heart and soul of any work of Shakespeare isn’t the action, but the language. Quick, what are the first two Romeo and Juliet quotes that you can think of? If you choose the “wherefore art thou Romeo” and “a rose by any other name” bits, you have Juliet to thank; in addition to having the most memorable lines in the play, she is often credited with having the most beautiful. It’s also important to note that Juliet speaks directly to the audience more than anyone else in Romeo and Juliet, which is always a good sign that Shakespeare thinks a character is important. (Either that, or Hamlet got unbelievably lucky.)

Most importantly, Juliet’s shows an astounding degree of personal transformation over the course of the story. She becomes a woman, but luckily for our modern-day sensibilities, it isn’t by sleeping with Romeo: despite being utterly dependent on her family, she forsakes them to marry for love; when Romeo murders her cousin, she takes her marriage vows seriously and stands by her now-banished husband; she is nervous about the illicit consummation of her marriage but unapologetic in looking forward to it. Juliet may not have the same level freedom than Romeo enjoys, but it only makes the fight she puts up that much greater.

About the Author:
Shmoop offers hundreds of free educational guides and references. We believe that any topic, like themes in Romeo and Juliet or Romeo and Juliet quotes, can be broken down in a way that is relatable and fun for students. . . We keep things more interesting by using television shows, video games, music, and fashion references throughout our guides. Our goal is not only to present the fundamentals, but to bring the material to life in a way that makes students ask more questions, instead of less. Check out Shmoop’s website to see how all of our free resources can make a difference in your study time.

2 comments for “The Hero(ine) of Romeo and Juliet?”