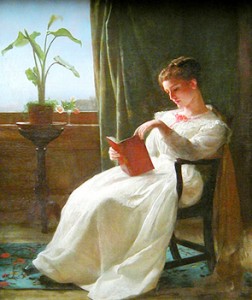 Pink Floyd was wrong. Very wrong. So wrong in fact that its famous lyric, “We don’t need no education,” is an assault on the ears of anyone who considers themselves to be grammar aficionados.

As ironically implied by its error-laden sentence, Pink Floyd was definitely wrong about needing education. They needed it and we need it too, especially that now-a-days, a bachelor’s degree is often a rudimentary ticket to entry for low-level jobs. In fact, with the current economic funk sending more and more people back to higher education, it is no stretch to suggest that our society certainly values education as a way to move up in the world—or at least hold onto wherever one is currently.

Our value of education and the importance it holds is readily reflected in our literature. Authors often use characters’ educational training as a plot technique to move them beyond their lowly status and succeed. In that way, education is fundamental to the American dream, the individualistic doctrine that says if you work hard enough and learn hard enough, you will move up in the world. Education allows social mobility; it empowers the lower castes of society to pull themselves up by their proverbial bootstraps and make something of themselves.

No clearer literary example of this can be found than in Jay Gatsby, F. Scott Fitzgerald’s self-reinventing tragic hero for which his classic novel The Great Gatsby is named. Gatsby—whose real name is Gatz—comes from a poor, Midwestern family with little inheritable potential for greatness. So he does what any red-blooded American does: he fakes it until he makes it. He takes a page out of Great Expectations and starts hanging out with the cooler people.

Though he doesn’t boast of it, the dude went to Oxford, only for five month. . Name recognition being everything, his new social-elite status is built on that fake education, which others use to buoy his credibility as someone of worth. A look at some Great Gatsby quotes, especially when Tom tries to discredit Gatsby’s education as to demean him, shows what value it has.

Never mind that his past catches up with him, or the fact he was murdered by an uneducated auto mechanic—the tiny Oxford detail encapsulates what is at the heart of the novel. The level of education distinguishes between who is upper class and who is lower class, and by the logic, the higher your education is, the higher your status will be. Even if it ends up being a total lie, thus implying the American Dream is shoddily built on arbitrary distinctions like higher education and unlikely to withstand any intense economic weather or destruction.

Another excellent literary example of education serving to buoy a character—whether it is an authentic one or not—is Jane Eyre. Jane Eyre’s education is mainly aesthetic feminine crafts—sewings, music, perhaps some foreign language—but it still allows her social mobility and money as a orphaned young woman. He education is her safe haven from her awful relatives, and eventually allows her to become a de facto teacher, governess and then wife of a super rich guy. Granted, the plotline is a bit more complex and convoluted than that, especially with the novel’s gothic elements and the crazy old pyromanic lady in the attic, but Jane Eyre’s formal education is what got the ball rolling.

While it may no longer be the case that education is the solve-it-all for society’s lower citizens, it has definitely been mythologized and painted that way—a necessary stepping stone to a high status and a better life.

About the Author:
Shmoop offers hundreds of free educational guides and references. We believe that any topic, like Great Gatsby quotes or Jane Eyre, can be broken down in a way that is relatable and fun for students. . . We keep things more interesting by using television shows, video games, music, and fashion references throughout our guides. Our goal is not only to present the fundamentals, but to bring the material to life in a way that makes students ask more questions, instead of less. Check out Shmoop’s website to see how all of our free resources can make a difference in your study time.