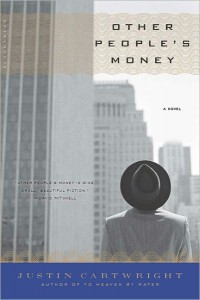 To be honest, when I started Other People’s Money

by Justin Cartwright, I wasn’t sure that I was going to love it. The book came to me through the LibraryThing Early Reviewers Program, and when I got the notice I was getting it, I couldn’t remember requesting it. It was a little slow going at first, but the story really draws you in. These aren’t always very likable people, but you find yourself interested in them and wondering how things will turn out for them. Eventually, I found I did not want to put it down.

Sir Harry Trevelyan-Tubal has been the head of Tubal & Co., a small privately-owned bank in England, for decades. A stroke has left him weakened, unable to write, unable to speak clearly. His son, Julian, has taken over the bank. His wife, Fleur, is absent — she can’t bear to see him this way. He is cared for by his longtime secretary, Estelle, who is secretly in love with him:

“But when Harry’s first wife, Eleanor, killed herself she had foolishly hoped that he might turn to her, Estelle. It was like something from Jane Austen: the plain governess who hopes her good qualities will win through with the master in the end. But he was arranging for Fleur, the twenty-five-year-old actress, to be cast in a play he was financing.”

The bank is in trouble. Julian was suckered in, like so many financiers, and now the bank is sunk deep in worthless mortgages and complex financial instruments that he barely understands. His father always said he wanted to run a bank, not a casino, but his son gambled and lost. Now Julian will need some fancy footwork — and shady dealing — to keep the bank solvent.

The complication in all of this is playwright Artair MacLeod, Fleur’s ex-husband. When they divorced, he was given a grant — a quarterly stipend and a stern admonition to stay away from Fleur. That has worked well for MacLeod, until the money dries up. He’s a character, one of my favorites, cobbling together a living out in the sticks from grants and speaking arrangements and children’s theater productions of Thomas the Tank Engine. When the checks stop coming, MacLeod takes action.

I loved the writing in this book — it pulled me in and kept me reading. I loved his descriptions of people and places:

“He couldn’t wait to come back to Cornwall, where you could take a lungful of air which had travelled undisturbed from Nova Scotia, rather than one which had passed through the lungs of twenty wheezing cockneys on its way to yours.”

The descriptions of the villa at Antibes, with its turtle doves and umbrella pines, its hushed servants and the view of the Mediterranean — vivid and enticing. (Well, maybe not the servants, but definitely the turtle doves.) It’s a peek inside a family that is shackled in many ways by its ridiculous wealth, by all the unwritten rules of their status and its obligations. They operate on a different plane than the people around them; it both insulates and isolates them.

You see the trainwreck coming, but there is no getting out of the way. I was particularly impressed with the wrap-up; I hate a book with a bad ending. Here, the storylines are wrapped up nicely, but not too tightly. Even in the train’s path, people manage to salvage bits of their lives; some of them are even happy. All in all, a lovely, satisfying read.

My copy of Other People’s Money was provided by the LibraryThing Early Reviewers Program free of charge.

1 comment for “Review: Other People’s Money by Justin Cartwright”