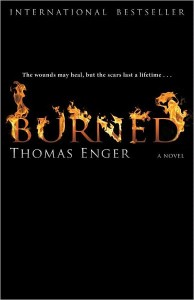 by Thomas Enger, Henning Juul is a veteran investigative reporter, returning to work after a series of personal tragedies left him changed and fragile. An apartment fire killed his son, ended his marriage and left him physically disfigured. He is struggling to deal with his fears and a case of PTSD that has left him unable to work for more than two years. A lot has changed in the world of internet news, he feels shaky, his sources and contacts may have moved on, but  he needs to prove himself, prove that he can still do the work — even if his new partner is dating his ex-wife. He’ll have the perfect opportunity: a gruesome murder committed in one of the city’s public parks. As Juul is drawn deeper and deeper into the case, both the danger — and the potential payoff — increase.

I have to admit that about 50 pages in, I almost set this aside. Early on, Juul is almost too fragile and too pathetic. It was painful to read. Here is a man who lost everything — his wife, his son, his career — and he feels responsible. He’s having a hard time adjusting to the regular rhythms of life. But I wanted to see what would happen to him and in the end, I’m glad I stuck with it.

The story is set in Oslo, Norway, which meant that the geographic references, and a lot of the cultural ones, were tough for me. There was some unfamiliar slang, but for the most part, it was easy reading. It was certainly an interesting look at the changes in the news business that have happened in just a few short years! Juul has to relearn his job while he is rushing to cover a major news story. His methods are very different from his showier colleague, but in the end, you know he’s going to be more successful.

Juul’s story is heartbreaking and you can’t help but root for him. Once I got past my frustration with Juul, it was easy to get sucked into the mystery. A young college student has been murdered — buried up to her neck and stoned to death in a tent set up in the park. The most obvious suspect, her Pakistani boyfriend, has some shady acquaintances. Her college friends, her colleagues in the film school and even her instructor all look a little suspicious. There are rumors that the murder was an honor killing, which has the potential to stir up a great deal of racial unrest. Juul is not going to have much time to get his sea legs back on this case, because he may be the next target.

I have been reading a lot of Scandinavian authors recently. Burned is Enger’s first novel, but I definitely look forward to reading the follow-up. With the cliffhanger that dangles at the end of Burned, how could I miss it!

My copy of Burned