I am a big fan of the Indie movement in publishing — I think it opens up so many possibilities for new authors, new genres, and great new things to read. (For the record, I am also a big fan of editors and spellcheckers and all the things that make those new genres pleasant to read.) This particular novel piqued my interest when the author began talking about his collection of tattoo pictures, enough that I wanted to share the story with you…

First off my book is fiction, but I did have the fine privilege of interviewing a few members of the Royal Canadian Mounted Police (RCMP) about their procedures. That said and done it almost ruined me for police television dramas.

I LOVE COP SHOWS. My favorite of all time was Homicide: Life on the Street. The handheld cameras, stories more on the characters than the crimes, it was great. Watching Detectives Frank Pembleton and Tim Bailis get a perp in the box was pure dialogue and emotional expression ballet. Then there was NYPD Blue, CSI, Law & Order (I love the “da-da-da noise when they would switch from witness to informant to witness that I put my own little L&O chapter in Red Island) Law & Order: SVU, Criminal Minds (I might have borrowed Dr. Reid’s name for my main character), Bones, and Rizzoli & Isles. I love them. I even go back to the detective shows of Simon & Simon, Remington Steele, and Magnum PI. Homicide, Bones, and Rizzoli and Isles started out as books so how can I not love them. The fast pace, the mystery, the detail, in the newer ones came the science; I’m getting all excited thinking about it.

Then I interviewed real cops and wrote a book.

I have never been a police officer anywhere, but I put pen to paper and wrote about one and it’s on the internet now so I must be an expert. In the TV shows the cops show up at the scene of a brutal murder ducking under the police tape and stroll right into the house or back alley talking about what they did last night. They don’t seem to have a care in the world. Police have only been on scene thirty minutes or so walking around. Maybe that was the case ten to twenty years ago, but things have changed drastically. With DNA and other detection methods police can’t just walk on a scene, kneel down next to the body and say, “bummer.”

“Marilyn is now covered from foot to neck in a white protective suit. We call then bunny suits. They are to protect investigators from leaving their own traces at a scene.”

In Red Island I have the characters both at the murder scene and during the autopsy wear a full body suit complete with hood and little booties the affectionately refer to as a “bunny suit,” not to make a bold fashion statement, but in order to protect the integrity of the scene. Hairs fall out, skin cells fall off, people spit, if they are doing this while standing over the body then all of that DNA is tainting any actual evidence. The RCMP Forensic Science and Identification Services (CSI) don’t joke around when it comes to a scene. How many cop shows have you seen a detective get mad because everyone trampled over potential evidence? Count them, I’ll wait. In modern crime detection precautions are taken. They wear the full body suit, only the most essential personnel are allowed on scene. For the RCMP the lead investigator can have the Commanding Officer escorted off of a scene.

I don’t want to get started on Dr. Isles, on Rizzoli & Isles, walking into murder scenes with 3inch heels and designer outfits. I’m sorry Tess Gerritsen, I love your writing, but that just isn’t done. I can also talk about how real police can’t punch in the details of a crime and have an instant printout of a national or world wide database or that DNA analysis isn’t a five minute thing. In fact it can sometimes take up to two weeks or more. I know in an hour show they have to stretch some facts and the cops look a lot better standing around in street clothes or suits instead of a generic “bunny” suit. I still watch them and can’t help from snickering, “a real cop wouldn’t do that.”

For Red Island: A Novel, I tried my best to stay as close to reality as fiction can allow. They have their bunny suits and do things in hopefully the right order. I’ll still continue watching the police shows and get all excited when they are standing over bodies dropping their own hair follicles. A good police drama is like a shot of tequila for someone who likes to drink slowly.

To contact Lorne Oliver or find out more about Red Island follow the links below. Lorne is also collecting pictures of tattoos on the backs of people’s shoulders. That is the main thing in common with the victims of the Red Island Killer. If you want to be a “victim” email him the pictures and he will add you to the album. 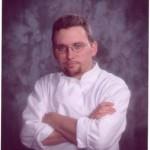