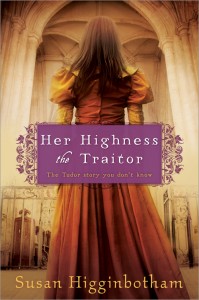 This is a rescheduled guest post — it was originally scheduled for Friday, June 15th, but the email reached me late Thursday evening. I was traveling all day Friday, so I made a little open space on the schedule for it today. I love the cover of the book, Her Highness, the Traitor, and I loved the guest post topic! Susan Higginbotham has written a bit for us about the source material she uses for her historical novels, including her subject’s last will and testament. It’s a source material that I never really considered before.

When researching my novels, I rely heavily on primary source material—wills, letters, contemporary chronicles, and so forth. To my delight, both of my heroines in Her Highness, the Traitor—Jane Dudley, Duchess of Northumberland, and Frances Grey, Duchess of Suffolk—made wills before their deaths, which I consulted in my research.

Frances Grey made her will on November 9, 1559, a couple of weeks before her death on November 20 or 21, 1559. Her will was short and simple: she left her goods and chattels in the hands of her second husband, the commoner Adrian Stokes, and also made him her sole executor. (It was proved on November 28, 1559, by Adrian Stokes’ proctor, who had the wonderful name of Justinian Kidd.)

The will of Jane Dudley, made within a few weeks of her death in January 1555, is a far more personal document, because Jane, as she explained, drafted it herself, without the aid of legal counsel.  In it she made typical bequests—gifts of clothing, bedding, and plate, for instance—and remembered her children and servants, as was common. One of those remembered in her will was her daughter Mary’s “little son”—the future poet Sir Philip Sidney, who had been born the previous November.

Other bequests, however, were quite different. Following the execution of Jane’s husband, John Dudley, Duke of Northumberland, Jane had devoted herself to trying to get her sons freed from the Tower. In doing so, she enlisted the help of the Spanish courtiers who accompanied Queen Mary I’s husband, Philip of Spain, to England. In her bequests to these Spaniards, Jane remembered their services to her with deep gratitude, and asked them to continue helping her sons after her death. To one high-ranking Spanish noblewoman, the Duchess of Alva, Jane left her green parrot, adding “I have nothing worthy for her else.”

Jane’s love for her dead husband, heartbreakingly apparent in a letter she had written trying to save his life, is attested in her will as well. She left her daughter Mary a clock “that was my lord her father’s, praying her to keep it as a jewel.” Elsewhere, Jane alludes to “my very own land by my lord my dear husband’s gifts.”

Jane asked for a modest funeral, explaining that she would prefer that her debts be paid and the poor be remembered “than any pomp to be showed upon my wretched carcass.” Whoever trusted to the transitory world as she had, the duchess added, “may happen have an overthrow  as I had.”

Interestingly, Jane had one final worry as she approached the end of her life. When she was dead, she insisted, she was not to be disturbed: “nor in no wise to let me be opened after I am dead: I have not loved to be very bold afore women much more I would be loath to come into the hands of any living man be he physician or surgeon.”

About Susan Higginbotham
Susan Higginbotham is the author of four historical novels, including The Stolen Crown, The Queen of Last Hopes, and Hugh and Bess.  The Traitor’s Wife, her first novel, is the winner of ForeWord Magazine’s 2005 Silver Award for historical fiction and is a Gold Medalist, Historical/Military Fiction, 2008 Independent Publisher Book Awards. She writes her own historical fiction blog and is a contributor to the blog Yesterday Revisited. Higginbotham has worked as an editor and an attorney, and lives in North Carolina with her family.