Review: Stories from the Golden Age by L. Ron Hubbard 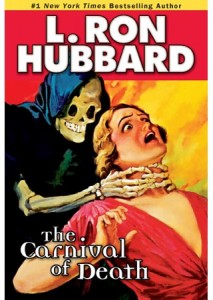 When I received the offer from the folks at Galaxy Press, I was a little reluctant. Great writing isn’t the first thing that comes to mind when you hear the name L. Ron Hubbard. But the audiobooks sounded like fun and I love old science fiction, so I figured I would give it a try.

The books are a hoot! This is cheesy, old-school adventure writing. The characters and dialogue are so old-fashioned and over-the-top that the stories are unintentionally hilarious. Add in some dramatic music and sound effects, and you’ve got the audiobook equivalent of those Saturday afternoon movie shows. The writing is so florid, it should be printed on purple paper:

Rising to a crescendo of stark horror, a scream of death hacked through the gaiety of the night. It came from the sideshows, from directly beneath the lurid banner that depicted ferocious African headhunters at their feasting.

In spite of the babble of the pelasure-seeking carnival crowd, the sound lingered eerily for an instant

Gaming wheel stopped their monotonous whirring. Faces in the crowd grew blank and then frightened

The hardened barkers whirled in their stands and then stared.

The gay ferris wheel stopped, its motor coughing and spitting in idleness

Grifter and rube alike, they all seemed to know that death stalked upon the midway

Seven stands away from the lurid banner, Bob Clark, Carnival Detective, paused for a second, held by the seeping terror of the shriek. Into his steel-colored eyes came a look of certainty. Then, before the crowd had recovered from that first shock, Bob Clark began to run.

Imagine it in the most melodramatic voice you can imagine, and you’ve got The Carnival of Death.

My Stories from the Golden Age collection included The Carnival of Death, Spy Killer, Under the Black Ensign and False Cargo. The stories are full of action and adventure, manly heroes and beautiful damsels in distress. They are also full of racial and ethnic stereotypes that would put an author out of business today. It’s the sort of casual bigotry you often find in old novels — not particularly distressing, if you understand it as a function of the era, but definitely something you would want to discuss with younger listeners.

These audiobooks would be great for a road trip. They’re short — only about 2 hours each — and entertaining without taking your attention away from the road.  These special audiobook collections can be ordered from Galaxy Press. My collection was provided free of charge for review.