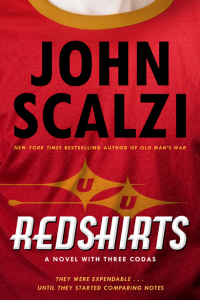 Redshirts may be the most fun I’ve had with a book this year. It made me laugh…and it made me go out and load my Kindle with other John Scalzi titles. I love the mix of humor and seriousness in the book, and I am looking forward to reading more.

Are you a Star Trek fan? If you’ve ever watched the old episodes, it didn’t take long to notice that there was always some poor schmuck of an ensign in a red uniform shirt who ended up getting killed on the away missions. In fact, the term “redshirt” became a stock phrase in the sci-fi world, referring to a character who dies soon after being introduced. But what about those disposable characters? Don’t they have stories of their own — friends and family and ambitions? John Scalzi’s Redshirts: A Novel with Three Codas

pays homage to those characters while he pokes fun at science fiction conventions.

Ensign Andrew Dahl has just been assigned to the Intrepid, the flagship of the Universal Union star fleet. He’ll be working in the xenobiology lab, and spending time with the other new crewmen: Maia, Jimmy, Hester and Finn. Things seem a little odd right from the start, and it soon becomes apparent that something strange is going on. The Away missions on the Intrepid seem to be unusually lethal, especially for new crew members. If Dahl and his friends want to survive this posting, they need to figure out a way to fight back.

I could tell you more, but I don’t want to spoil the fun. The book makes fun of sci-fi television shows, directly and indirectly, and as a fan of the genre, I enjoyed seeing some old standbys given some play. The ridiculousness of the Away missions, the ensigns’ crazy plan to discover the Intrepid’s dark secret, and the absolutely insane conclusion they come to were a joy to read. I found myself laughing page after page after page.

But the book also has a serious side. Their conclusion may be insane, and they may come up with a pretty brilliant plan, but there are consequences. The codas at the end of the book are more serious, detailing some of those consequences and the people whose lives were changed. It gave the book balance, and made it a more satisfying read.

This is a great book. I’ve been recommending it to everyone (it provided a great break from the usual sentimental holiday stuff). After much prodding from friends, I picked up my copy of Redshirts: A Novel with Three Codas

from the local library, then promptly bought a bunch more John Scalzi