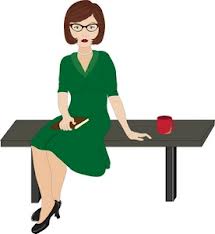 Today, I’ve got a really special guest post. Helen Harper, a romance novelist, emailed me regarding a review of her new book, Bloodfire

, and to comment on a quotable I posted a few weeks ago. It was a quote from John Waters about the books he read in school. I have always been an avid reader, even as a kid, and it seemed to me that my English teacher really wanted to change my mind. The books my teachers chose were never new, never relevant to my life, and always seemed so dry and dusty that I could barely choke them down. But apparently, things have changed. Here’s what Helen had to say…

When I was at school, in the depths of Scotland, we read whatever the teacher or the exam board or the government decided we should read. At ten or eleven, I remember this being The Hobbit. By this point, I’d already devoured The Lord of The Rings several times over and was none too impressed at being forced to read what I deemed the ‘kiddie’ version. A few years later it was some kind of friendship across the Northern Irish religious divide. Yes, yes, I understand the reasons why, but, jeez, it was deathly dull. Later we progressed to Lord of the Flies in order to sit an exam. The teacher ran out of time to read it in class so told us to finish it at home. I skipped the final five chapters and just read the last page (because it was about a bunch of idiot boys that I could see no personal connection with). Towards the end of my school education, it was The Private Memoirs and Confessions of A Justified Sinner. A beautiful book now that I am thirty something and can appreciate it, but when I was seventeen? No chance.

Many schools around the world now promote the idea of Literature Circles. Teachers give a class of mixed ability a choice of, say, six to eight books and then they choose what they want to read in groups of up to five. It’s like a book
group but with some guidance and learning thrown in. Right now, I have a class that is reading Life of Pi, Catch-22, I Am Legend, the wonderful A Monster Calls by Patrick Ness, and the life-affirming Stargirl by Jerry Spinelli. And, yes, all at the same time. They don’t all have to sit around reading the same tome that is too difficult for some and too easy for others. Girls don’t have to read a boy-oriented thriller because someone is concerned about the gender gap in literacy. Nobody has to read a book that I’ve arbitrarily chosen just because I’m the one in charge.

Okay, yes, there are times when we still need to read a classic novel, and the kids still need to sit and write about it in an exam. Hey, that’s life. We acknowledge, and let our students acknowledge, that sometimes you read for purely pleasure
and sometimes you read to study and prove a point. The internet, however, means that my class can connect to another class on the other side of the world and share opinions about that book. It also means we can track the novel’s fictional progress on Google Lit Trips. Or we can turn it into a drama and act it out. Or we can write our own version if we’re not happy with the way things turned out. We don’t sit behind desks and plough through it chapter by chapter. We engage with it. And, I believe, exam boards are getting more savvy and allowing for more scope and freedom. This year our fifteen year olds have been assessed on, amongst other things, their analysis of The Hunger Games. We have a list of prescribed texts that includes (still) Lord of the Flies, but also The Curious Incident of the Dog In The Night-time and Never Let Me Go. My IB students (probably AP to my American friends) recently just finished studying McCarthy’s The Road. And that one girl in the class who has only ever read two other books in pretty much her entire life absolutely loved it.

Of course, I’m lucky enough to teach in a well resourced and well funded school. I don’t have to choose between dog-eared copies of A Farewell to Arms and Far From The Madding Crowd because that’s all that’s left in the cupboard. English teachers generally teach because they love reading, and they love books. They want their students to feel the same: to drool over a book. To want to rush and have to tell all their friends about a book because it was just that good. To cry. To laugh. To feel what only literature can make you feel. So if your kid’s teacher or your teacher or your school is force-feeding the class with a dull text that meets the needs of no-one, and that is sucking the desire out of every single kid to ever read anything again, you can bet that it’s because there’s not enough money to buy anything else. And that’s not the school’s fault – it’s the government’s, or the LEA’s, or the school board’s. So get writing and calling and complaining to them.

Lisa here: I’m glad to hear that things are improving for students and that more classes are getting to read books that will give them a love of reading and inspire them to keep reading. I can’t think of any other skill that will serve them so well for the rest of their lives.