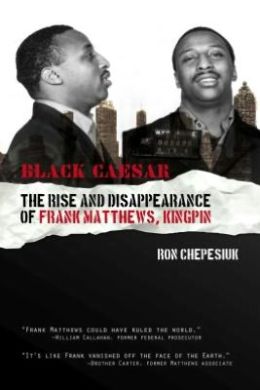 Hey, it’s Friday and I am letting authors do the work today! I’ve got a great guest post from Ron Chepesiuk, author of Black Caesar: The Rise and Disappearance of Frank Matthews, Kingpin

. I asked about what it was like to research a book like this – digging up old stories, talking to reluctant witnesses – and here’s what Ron had to say…

My first encounter with the urban legend, Frank Matthews, came in 2006 while I was researching my book, Gangsters of Harlem, and looking for kingpins to profile. It did not take me long to decide to include a chapter about Frank Matthews.

Matthews had operated out of Brooklyn but spent much time in Harlem, and the narcotics he peddled had a devastating impact on the neighborhood. In 1973, Frank Matthews jumped bail with $15-20 million and a beautiful woman named Cheryl Denise Brown and has never been seen again.

I knew the story was the biggest mystery in organized crime. Indeed, the more I researched the Matthews story, the more intrigued I became with him. He was certainly bigger than life—a country kid still in his teens who headed to the big city in search of fame and fortune and overcame many obstacles before becoming history’s first African-American drug kingpin. Matthews dominated the New York drug before other big name kingpins Nicky Barnes and Frank Lucas made their impact. His reputation as a gangster soared to such a level that people called—or hailed— him “Black Caesar.”

In researching a true crime story, the most importance source a writer can use is the court records. Matthews had fled but his crew was indicted two years later and a big trial ensued. Forty witnesses testified providing great material for the story. But when I checked with the National Archives, it could not find the records. The Archives did a thorough search, but never find the records. I had one hand behind my back, so to speak, as I began researching the book.

Over the next six years, as I looked for leads, documents and photos that could help flesh out Matthews’ remarkable story, I became, like everyone who delved into his life, obsessed. I thought surely there must be at least a few clues to tell us what happened to Black Caesar. Surely someone snitched for the reward and gave the authorities a credible lead on where he might be hiding. Surely, somebody must have bragged to authorities about having inside knowledge of Matthews’ fate. Yes, it was difficult to follow the money trail in the 1970s, but surely the authorities must have a lead to some of the $15-20 million Black Caesar was believed to have stashed away before jumping bond. Surely a young woman like Cheryl Denise Brown, the women Matthews ostensibly fled with, must have gotten a little homesick and tried to reach out to her family and friends. Surely,at least one time. And surely Matthews’ fingerprints, which are on file, must have shown up someplace, somewhere, sometime.

In researching the Matthews story, I got a good idea of the problems, frustrations and challenges that the DEA and USMS officials faced. Several sources I contacted thought, for whatever reason, that I was trying to find Matthews. I would explain I was merely documenting the Matthews story for the historical record while time allowed me to get access to the information, but many sources did not Some sources did have a good reason not talk to me. One source, for instance, had been a snitch and most likely he wants to forget about the past. When I approached his house to talk to him, he was on a walker and did not look particularly healthy. As he left the house and leaned on his walker, he kept repeating the mantra, “Dead man walking, dead man walking.” I don’t know if he was referring to me, the author, or to himself, the snitch.

Another potential source whom I approached through an intermediary and who reportedly had close ties to Matthews, refused to talk to me at first. Then a couple of weeks later, the intermediary told me the man was willing to talk now. I asked the intermediary why he had changed his mind. He explained that the man had received a phone call from Frank Matthews, who was supposedly calling from Chicago. The man told Black Caesar that a reporter (me) was snooping around and wanting to ask questions about him, but that he had told the reporter through an intermediary he didn’t want to talk to According to the intermediary, Mathews told the man, “You should talk to him. It’s about time my story was told.” Matthews must have changed his mind because the man who claimed to be in contact with Matthews never did talk to me. During my research, I heard my share of strange tales about Matthews’ appearances in Durham. One is the famous story about how, a few years ago, he appeared at a funeral dressed as a woman. Some local sources said that would be just like Pee Wee, the prankster, to dress like a woman and sneak into town. Other sources said, “Nah, Pee Wee was too macho to dress up as a woman, even for a joke.”

Two sources from Durham, North Carolina, Matthews’ hometown, even assured me that Matthews had had a sex change. A couple of homeboys claimed to have drunk booze and partied with Pee Wee at some of the liquor houses that still populate Durham, although how he could do something like that without it becoming common knowledge in a small town was never explained. And as one Durham source scoffed: “These dudes who claim to be with him weren’t close to Pee Wee. You never hear his home boys claiming to be in contact with him.”

When I finished the book I had to draw the sobering conclusion that no one really knows what has happened to Matthews. My guess is we will never know. With each passing year, it becomes less and less likely that any evidence will surface that tells for certain what happened to Frank Larry Matthews. The only sure thing we can count on is that the remarkable urban legend of Black Caesar will continue to grow and that we will not see a kingpin like him again.

And there you have it! I love reading about how authors do their work, and this must have been a really fascinating case to research. A special thank you to Ron and the folks at Partners in Crime book tours for bringing this to us!

George, a glass of wine, a good book…
Saturday Snapshot