Review: Frozen in Time: An Epic Story of Survival and a Modern Quest for Lost Heroes of World War II by Mitchell Zuckoff 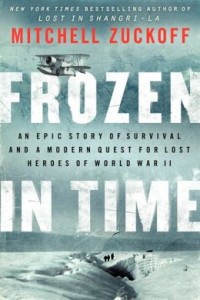 Knowing what this book was about, I wasn’t expecting a happy ending. What surprised me was how often I was moved to tears by the sheer bravery and strength of the men in this novel. What kind of inner strength does it take to go out into what will likely be deadly conditions, risking your own life, to rescue a man you’ve never met? The “very unofficial” motto of the Coast Guard is, according to author Mitchell Zuckoff, “You have to go out, but you don’t have to come back.” Over and over these heroes prove that they are undeterred by the dangers, even when they know that motto to be true.

Frozen in Time: An Epic Story of Survival and a Modern Quest for Lost Heroes of World War II

is the story of a series of plane crashes over Greenland in 1942. The US had military bases on Greenland, protecting both the strategic location of the island as well as important natural resources there, but the conditions were so rugged that the men serving there were constantly in danger.

“But as soon as American planes began flying over Greenland, they began crashing into Greenland. Three B-17s ditched on the very first day of flights, in June 1942.”

The subject of the novel is a US cargo plane that crashed on a routine flight over the Greenland ice cap in November, 1942. Dozens of men were involved in the search and rescue attempts. A B-17 bomber, en route to combat duty overseas, pitched in to help with nine men aboard. The rescue plane also crashed on the ice; all nine men survived the crash, only to endure more than 140 days, shivering in the tail section of their plane in sleet, snow, and temperatures that routinely reached -40F. Not all of them made it back to safety, but the survivors were able to tell their story.

“Thirteen days had passed since their crash, five since they’d been spotted from the air. They were weak, wet, freezing, and out of food. They knew they’d never survive a trek back to the plane, and they saw no point in trying. They doubted they’d live through even one more night of 40-below-zero cold. Desperate, with nothing to lose, Goodlet thought they should try again to light their parkas. If it didn’t work and the coats were ruined, death by hypothermia would come mercifully sooner.”

Greenland is basically a glacier, so there is not only snow and frigid temperatures, there are high winds, polar bears, bottomless crevasses and the ever-shifting ice to contend with. Humans weren’t made for these conditions, and I was stunned, reading the hardships these men endured. Finding them was the first hurdle, but once rescuers located what was left of the plane, they had to figure out a way to get to the men. Landing on the ice was almost impossible, due to the swirling wind and the danger of sending the whole plane tumbling into a crevasse. Traveling overland was just as difficult, if not moreso. When planes could fly over, they dropped supplies – everything from toilet paper, dry socks and sleeping bags to ham sandwiches, letters from home and bottles of scotch. The survivors battled deadly frostbite, depression, and the special sort of psychosis that comes with months trapped in an icy grave with little hope for rescue – but they battled it, and they survived.

This is also the story of The Duck – the Grumman Duck, a Coast Guard rescue plane aboard the US Coast Guard cutter Northland. The two men who piloted that plane are the only Coast Guard war dead who have not been brought home to rest. They are legends in Coast Guard history, and an inspiration to Lou Sapienza, a modern-day hero who is determined to bring home those men who perished, and to make sure that the Grumman Duck doesn’t fall into the hands of unscrupulous dealers or private collectors. The modern tale of the 2012 expedition to locate and recover the plane and the pilots is also told here – the struggle to enlist the aid of the US Department of Defense Prisoner of War/Missing Personnel Office (DPMO) in providing funding and equipment for the expedition, as well as the dangers inherent in the mission itself.

Zuckoff is precise in his telling of the story, painstakingly researched and doing his best to avoid inventing conversations and details. He tells their life stories, their nicknames, their foibles, in a way that makes you feel like you are among old friends, which makes their struggles even more poignant. He is deeply entrenched in this story, offering up his credit card to help fund the 2012 expedition, even agreeing to put up his house as collateral! His sly wit surfaces time after time, catching me unawares and making me laugh:

His respect for these men shines through. I was moved to tears on several occasions, and even though I knew, at least in part, how the story would end, I was really rooting for these men.

This is a terrific book, and I highly recommend it for those folks who like a good adventure story. I like reading about adventures in the Arctic, even though I am not a cold-weather fan, and I have already picked up Zuckoff’s previous book, Lost in Shangri-La: A True Story of Survival, Adventure, and the Most Incredible Rescue Mission of World War II

, to warm me up after my cold-weather reading. I’ll be passing my copy along to some friends who I know will really enjoy it.

My copy of Frozen in Time: An Epic Story of Survival and a Modern Quest for Lost Heroes of World War II

was a review copy, provided free of charge. For more about Mitchell Zuckoff, check out his website.

1 comment for “Review: Frozen in Time: An Epic Story of Survival and a Modern Quest for Lost Heroes of World War II by Mitchell Zuckoff”