Christine’s Review: The Awesome Guide to Life by Jason Ellis 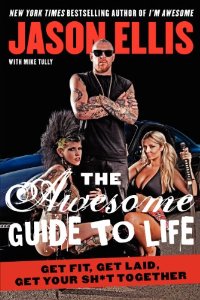 If you’re a fan of books by motivational speakers, you know that sometimes the cover is of questionable taste.  For example, Larry Winget’s recent title Grow a Pair features the author holding a pair of personal watermelons, representing…a pair.  When I saw Jason Ellis’ book, The Awesome Guide to Life: Get Fit, Get Laid, Get Your Sh*t Together

, I expected a similar type of book.  Why wouldn’t you – it featured a woman sporting a mohawk on the cover.  However, appearances can be deceiving.  This book is meant to be motivational, but I am hoping that its reach is limited to Ellis’ viewers on SiriusXM.

The demographics for this book are inexperienced young men who are presumably fans of Ellis’ show.  Ellis’ goal is to teach you how to be a shallow, sex-starved twenty year old drinker and drugger.  He takes the approach of shaming the reader into wanting to eat healthy, dress well, and get in shape. If this approach is motivating to you, then it might work…with additional information.  Ellis’ plans are so basic that it is not really worth spending money on even those chapters. There are so many other products on the market.  I’ve also noticed no disclaimers.  As a result, following the actions in this book would leave you open to sue him from anything from a torn ligament to getting an STD.

You might want to feel sorry for the insecure young man who feels he needs Ellis’ tips on women.  The author tries to make himself out to be an in-demand stud, but he comes off as pathetic. It reminds you of Thicke’s uncut version of his “Blurred lines” video (where he has to spell out that he has a big penis at 3:14 and 3:52). If you have to brag about it that much, you’re probably lacking something.

The fact that this type of book is being published by Harper Collins in 2013 just reinforces that misogyny is alive and well, even in America.  Also note that I read this offal from cover to cover to provide you with a comprehensive review. My copy of The Awesome Guide to Life: Get Fit, Get Laid, Get Your Sh*t Together

was a loaned advanced reader copy, provided free of charge, for a limited time period.

Review: Rage Against the Night, short stories by Stephen King, Ramsey Campbell, Peter Straub and more
New on the Shelves…

13 comments for “Christine’s Review: The Awesome Guide to Life by Jason Ellis”