I was lucky enough to pick this up when Amazon offered it for free and I feel very fortunate. I don’t expect that Twelve Years a Slave: Plus Five American Slave Narratives, Including Life of Frederick Douglass, Uncle Tom’s Cabin, Life of Josiah Henson, Incidents in the Life of a Slave Girl, Up From Slavery

will be an easy read, but I believe it will be worth the effort: 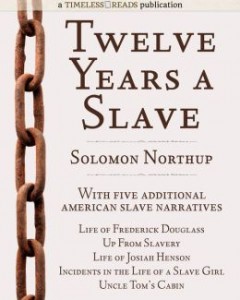 This exciting new release includes the complete text of “Twelve Years a Slave.” Read the amazing story of Solomon Northup before (or after) you see the critically-acclaimed movie of 2013. But this collection doesn’t stop there. It also includes: