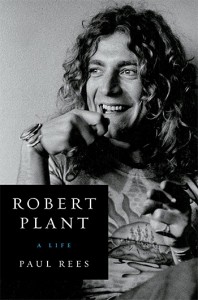 I’ve got so many thoughts running around in my head, after finishing Robert Plant: A Life

by Paul Rees. Let me see if I can put them in some order:

1.  It has brought back fond memories of the Robert Plant poster that I had on my bedroom wall as a teenager. I studied that poster in great detail. I had thoughts about that poster.

2.  It is sort of sad to realize that by the time I was old enough to fall in love with Led Zeppelin’s music, they were already imploding.

3.  If I had been asked before I started the book, I would have said that I knew a bit about Robert Plant. I did not. Lots that I didn’t know.

4.  Perhaps most importantly, at least to my wallet, this book is going to cost me a fortune. I’m glad I got some  iTunes gift cards for Christmas, because I am going to be downloading a lot of music.

First off, I really enjoyed the book. The backstory of his young life was fascinating to me. The idea that at 15 or 16 years old Plant was running around, singing in clubs, appearing with a bunch of different bands, is remarkable to me. I can’t imagine having that kind of ambition and confidence at that age.

“The story goes that Headmaster Chambers told [Plant] he would never make anything of himself. When I came back to the school in the early ’70s, Chambers himself told me that Robert had later turned up at his house in a Rolls-Royce and asked the Headmaster if he remembered him.”

The story of how Led Zeppelin came about, how it became arguably the greatest rock band of all time, and how it imploded — that all made for great reading. Even more interesting was the story of what Plant has been doing since Led Zeppelin — so many bands, so much music, such an interesting life. For a music fan, even if you weren’t a big Led Zeppelin fan, it’s a terrific read. The big issue — and it is always an issue with biographies — is that this is really focused on on Plant, of course, and it definitely paints him in the best light possible. That always makes me wonder about how much is true and how much is slanted. It’s clear that Rees is a friend of Plant’s, so why wouldn’t he want to give this the best spin he could?

There were a couple of things I found really interesting. First, I admire the way that Plant did not get sucked into Led Zeppelin remakes. There were some reunion concerts, there were some collaborations with Jimmy Page, but I imagine that it would have been very easy to fall back into old habits. There would have been a fortune to be made there, with the Led Zeppelin name, and I think it would take a lot of will to pull free.

Second, and definitely related, Plant seems to have a remarkable ability to walk away. After Led Zeppelin, he is involved in a number of projects — The Honeydrippers, Band of Joy, Strange Sensation, his collaborations with Jimmy Page and Allison Krauss, the Sensational Space Shifters — and when he’s done with them, he’s done with them. His album with Allison Kraus, Raising Sand

, is haunting and amazing and won a Grammy for Best Pop Collaboration with Vocals in 2008. But that was it – they didn’t work together again. There were short tours with Band of Joy, but when he decided that had run its course, Plant ended it. I’m not sure what I think about that; I wondered a lot about his bandmates, and what an upheaval it must have been for them, but you have to admire such a clear vision and that kind of determination.

“I once asked Robert how he went about choosing a girl when he was in Led Zeppelin,” adds Hossam Ramzy. “He told me, ‘It was very simple. There would be a thousand of them and I’d just go, “You, you and you – fuck off. The rest, come with me.’ “

I also wondered a lot about John Paul Jones. Although there were some Led Zeppelin reunions, Plant seemed dead-set against working with Jones, although no specific incident seems to have spurred that, at least none that was laid out in the book. It made me curious.

The final thing I was curious about was the drug use. There is a lot of talk in the book about Page’s heroin addiction and John Bonham’s addictions, which ultimately lead to his death. There is much less talk, however, about Plant’s drug use. Was he just a casual user, as opposed to an addict? Might go along with that sense of determination, but it was never really answered, at least for me.

At any rate, an excellent biography, lots of great stories and photos, plenty of input from friends, bandmates, and others who knew him. It paints a compelling portrait of a man who has led an amazing life and continues to make amazing music.

“Robert Plant turned 65 in August 2013. In his home country he is now eligible for a bus pass and a state pension.”

My copy of  Robert Plant: A Life

is an Advanced Reader Copy, provided free of charge. This is the kind of book that makes all the work on this website worthwhile!

3 comments for “Review: Robert Plant: A Life by Paul Rees”