I was really excited to get my hands on this one! I thought I’d missed out, but Shannon at ItBooks managed to find a copy for me! It’s The $11 Billion Year: From Sundance to the Oscars, an Inside Look at the Changing Hollywood System 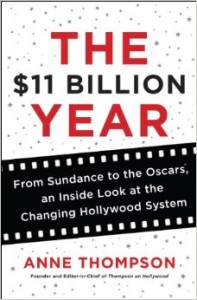 What changed in one Hollywood year to produce a record-breaking box office after two years of decline? How can the Sundance Festival influence a film’s fate, as it did for Beasts of the Southern Wild and Searching for Sugar Man, which both went all the way to the Oscars? Why did John Carter misfire and The Hunger Games succeed? How did maneuvers at festivals such as South by Southwest (SXSW), Cannes, Telluride, Toronto, and New York and at conventions such as CinemaCon and Comic-Con benefit Amour, Django Unchained, Moonrise Kingdom, Silver Linings Playbook, Les Misérables, The Life of Pi, The Avengers, Lincoln, and Argo? What jeopardized Zero Dark Thirty‘s launch? What role does gender bias still play in the industry? What are the ten things that changed the 2012 Oscar race?

When it comes to film, Anne Thompson, a seasoned reporter and critic, addresses these questions and more on her respected daily blog,Thompson on Hollywood. Each year, she observes the Hollywood machine at work: the indies at Sundance, the exhibitors’ jockeying at CinemaCon, the international scene at Cannes, the summer tentpoles, the fall’s “smart” films and festivals, the family-friendly and big films of the holiday season, and the glamour of the Oscars®. Inspired by William Goldman’s classic book The Season, which examined the overall Broadway scene through a production-by-production analysis of one theatrical season, Thompson had long wanted to apply a similar lens to the movie business. When she chose 2012 as “the year” to track, she knew that box-office and DVD sales were declining, production costs were soaring, and the digital revolution was making big waves, but she had no idea that events would converge to bring radical structural movement, record-setting box-office revenues, and what she calls “sublime moviemaking.”

Though impossible to mention all 670-plus films released in 2012, Thompson includes many in this book, while focusing on the nine Best Picture nominees and the personalities and powers behind them. Reflecting on the year, Thompson concludes, “The best movies get made because filmmakers, financiers, champions, and a great many gifted creative people stubbornly ignore the obstacles. The question going forward is how adaptive these people are, and how flexible is the industry itself?”

Review: This Dark Road to Mercy by Wiley Cash
Quotables