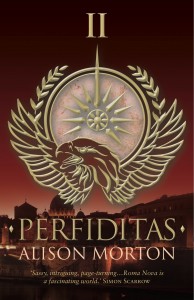 Just about a year ago, I hosted a guest post from Alison Morton, author of Inceptio

. Now the second book in the series, Perfiditas

, is on the shelves at your local bookstore, so I thought it would be good to have it on the Shelves here!

First, a little about the new novel, the second in the Roma Nova series:

Captain Carina Mitela of the Praetorian Guard Special Forces is in trouble – one colleague has tried to kill her and another has set a trap to incriminate her in a conspiracy to topple the government of Roma Nova. Founded sixteen hundred years ago by Roman dissidents and ruled by women, Roma Nova barely survived a devastating coup d’etat thirty years ago. Carina swears to prevent a repeat and not merely for love of country.

Seeking help from a not quite legal old friend could wreck her marriage to the enigmatic Conrad. Once proscribed and operating illegally, she risks being terminated by both security services and conspirators. As she struggles to overcome the desperate odds and save her beloved Roma Nova, and her own life, she faces the ultimate betrayal…

Reaching back into the past to write the alternative present

Thank you so much for asking me back, Lisa. In my previous post, I outlined the concept of alternating reality where the line of history changed in the past to make our present different. This time I want to be more “hands on”.

Like any straight historical fiction, alternate history stories need good research behind them. Well, unless you are writing a ”rule of cool” no-holds-barred, fantasy story like the film “Inglourious Basterds” which is fun, but not exactly historically logical!

Once you have decided on the point of divergence in the past, I.e. where history as we know it (our timeline, or OTL) splits and an alternative line emerges (alternative timeline, or ATL), you need to research that divergence point so that you have a firm basis for taking your story forward. If you don’t know where you start from, you run the risk of the dreaded credibility gap.

As writers, our job is to make things up, but readers get so much more out of a book if they know the author has done that job properly. Alternative history is imagined, but should follow “da rulz”. So what are they?

1. Identify the point of divergence and make it logical. It doesn’t have to be a grand event or have a grand cause. In history, there are many hair’s breath events caused by, for instance, weather, e.g. Washington’s crossing the Delaware River in 1776. On 26 December, the weather became progressively worse, turning from drizzle to rain to sleet and snow, plus very strong winds and floating ice in the river. Just suppose the blizzard had intensified, throwing all those boats and troops to their death in the freezing river…

My books are set in Roma Nova in the 21st century, but the country’s origin stretches back to a divergence point in AD 395 when the Christian Roman emperor Theodosius issued the final edict banning all pagan religions. Religious persecution often changes history: Protestant Huguenots were thrown out of France which caused the collapse of the French silk and weaving industries and destruction of a prosperous mercantile and professional class from which the French economy took years to recover.

2. Research the divergence point thoroughly. Find sources, buy books, visit places, museums, conferences and ask questions. Check you have the correct clothing, food, armour, currency etc. for the time you are writing about. The Roman civilisation lasted over 1,200 years; things were significantly different in AD 395 from how they had been in 100BC. Serstertii, the archetypal silver Roman coin, had disappeared by AD 395 and the gold solidus served as the standard unit, so my 21st century Roma Novans use solidi.

3. Reinforce the divergence point story to anchor the time you are writing about. People often refer back to their country’s foundation story and Roma Novans are no different and often quote the courage of how over four hundred Romans loyal to the old gods trekked north out of Italy to find refuge in the semi-mountainous area near modern day Austria.

4. Use elements from the historic record carefully, but not fearfully. In my books, the hero is kind of spy/special forces operative, so I reached back into history and plucked the Praetorian Guard forward more than thousand years into the 21st century. Not only does this build on the thoughts of toughness, a dash of ruthlessness and a sense of duty and glamour that we may already have about them, it uses their historic name to anchor them as archetype Romans guarding the ruler and the state. I’m aware they became corrupt in real history, but as in straight history, in alternative history you can bend the rules a little.

5. Think through the setting that has formed your characters. No country can survive without a functioning government, an economic, social and political system, food, law and order and income. You don’t need to mention these as such, unless it impacts on the plot, but you need to have it all worked out in your head, or in a notebook or a file on your hard disk or in the cloud.

How do people make their living? How are they educated? What kind of industry is there? Is the government representative? Are laws authoritarian, permissive or strict? What is the food like? Are there markets, little shops, big chains? What does the money look like?

One big thing to think through apart from its history is what your alternative world looks like. If it’s a country we already know, has transport developed beyond the horse and cart to steam trains or electric trains? Is it safe to travel from one town to another? If it’s an imaginary country, are there mountains, seas and rivers? What’s growing in the fields, does the countryside consist of plains, valleys or mountains?

6. Ensure your story is essentially gripping and page-turning whatever its setting. Creating an exotic world will not save a weak story however original and detailed you make it. Can you grab the bones out of it, e.g. trap – conspiracy –on the run – confronts bad guy, and see if it would work in another genre?

7. Make sure your characters live naturally within their world. You have to get the essence and detail across to the reader without any info dumps. No reader wants a detailed history lesson in the middle of an action scene. Pare these to a minimum, just enough to take the narrative forward. Imagine explaining somebody’s entire life story to your best friend when you’re relaxing over a drink. All your friend wants are the bare facts of what that person has been doing to cause you to mention them.

Now you’re armed with these tips, why not try alternating time yourself? 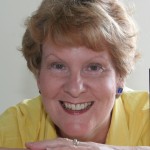 Teaser Tuesday
New on the Shelves…