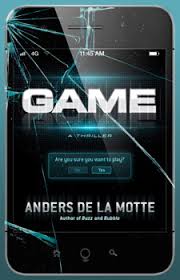 Have you noticed that everything is a trilogy these days? I always thought that the way things worked was that you published a book and if it did well, maybe your publisher wanted another. Maybe you could turn it into a series. That seems passé these days – now, everything is a series right out of the box.

That’s not always a good thing — sometimes, I think it’s just lazy writing. Instead of having to create a self-contained story, something that could be wrapped up in a single volume, writers can let their story meander all over the place. Instead of coming to a denouement, wrapping up the story and tidying loose ends, it’s much easier to write a cliffhanger.

Now, after all that, you might think that I was disappointed to find out that Game

by Anders de la Motte was a trilgoy. In the beginning, I was skeptical, but I found that I was really enjoying the story and look forward to what de la Motte would do in the next volume.

Henrik “HP” Pettersson is a pretty typical slacker – under-employed, lacking much motivation, but with a pretty high opinion of himself (mostly unfounded). His life is going nowhere. Then one day he finds a cell phone on the train — a very snazzy, high-end cellphone that he figures he can sell for enough to keep him in beer and cigarettes for a while. That is until the phone gets a text: DO YOU WANT TO PLAY A GAME?

At first, he ignores texts, assuming they are for the rightful owner. But when the texts start to refer to him by name — WANNA PLAY A GAME, HENRIK PETTERSSON? – he’s intrigued.

He finds himself in the world of The Game. He is assigned tasks, which could be anything from stealing an umbrella to hacking the power grid. He films himself performing these bits of vandalism, and the results are posted online. Suddenly, he’s got cash, he’s got a fan base, and he is in way over his head. The tasks get more and more dangerous, until it becomes clear that the people running The Game have more power than he could possibly imagine…

It’s a pretty decent thriller! There are lots of plot twists and turns. The Game itself is so big, so involved, that it teeters right on the fine edge between Don’t Be Ridiculous and Maybe-Just Maybe. There’s a good storyline and while you can see some of the curve balls coming, there were a few that came right out of left field. Game also does a nice job of both tidying up loose ends and giving you a good cliffhanger. The ending had me literally thumbing back through the last chapter, trying to figure out whether I had missed something, it was that much of a shock. It really left me wondering about where the next book will go. For a change, I don’t have to wait to find out — the rest of the trilogy (Buzz

) is available on Amazon.

My copy of Game