Review: Only the Innocent by Rachel Abbott 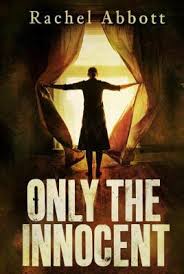 was her first novel. This is the sort of author story I love to read – I love the variety that epublishing brings us, and I hope that the trend continues. I only wish that I had enjoyed the book more.

has some major issues and plot holes, in my opinion. There is still an entertaining mystery here, if you can suspend enough disbelief. The writing (aside from the plot issues) was pretty good and I would definitely give another story of Abbott’s a try, even if it wouldn’t be at the top of my TBR pile. That said, I had some serious issues with this novel.

There will be some spoilers below, so you may want to skip to the end if you don’t want to be clued in!

Laura Kennedy is a modern young career woman, working for a film company, when she meets Sir Hugo Fletcher. Hugo is older, very rich, very married, so of course she immediately starts dating him. The hilarious thing is that Laura has just won an award for a documentary film on abusive relationships, and yet she falls into every cliche – he cuts her off from friends and family, makes her quit her job, demeans her and criticizes her at every turn. He refuses to meet any of her family until the wedding – won’t even let her see his house until after the wedding, every detail of which he plans right down to her dress and flowers. No way a woman like the Laura they describe would fall for it – and if she would, she wouldn’t make a very likable or sympathetic character.

After her husband’s murder, Laura “reconnects” with her former best friend, Imogen. They haven’t spoken in years and there is a lot Imogen doesn’t know about Laura’s marriage and their estrangement (entirely due to Hugo, of course). Over the years, Laura has written letters to Imogen, letters that she has kept hidden and never mailed, explaining the bizarre circumstances of her marriage. When Imogen shows up after Hugo’s death to comfort Laura, Laura gives her the letters to read.

Okay, some of that is plausible – except for the fact that first, we learn that Laura was writing these letters to Imogen, undetected, while she was forcibly confined in a mental hospital, drugged and keenly observed. How could she have written them and where would she have hidden them? Makes no sense. And we later learn Laura and Imogen have been back in contact for quite some time. In fact, Laura has drafted Imogen to assist in her plan to blackmail her husband. And she did this without telling her about the sham of  a marriage and her reasons for needing protection? That also makes no sense.

There are a number of mysterious, italicized asides from a mystery woman. We glean that she is locked up, chained actually, in a remote room somewhere, without food or water, waiting for her mysterious benefactor to return. As soon as we learn that Hugo’s family charity dealt with helping young prostitutes, we know who she is and who her captor must be. The book would have been considerably better without those snippets; they gave way too much away.

In the end, I kept reading just to see how Abbott would finally resolve the story. It was pretty much what I suspected, and not terribly satisfying. For someone who was under constant observation by a husband who had threatened to kill her, Laura had a lot of leeway, it seems. The explanation for Hugo’s sexual proclivities was pretty ridiculous. It just wasn’t satisfying for me. I could see the glimmers of a great story here – the writing was quite good, there were some interesting characters, and Abbott created a pretty intricate plot – but in key ways, it fell apart for me.

My copy of Only The Innocent

by Rachel Abbott came from my personal Kindle library.

New on the Shelves…
Why don’t I run into guys like this?