Review: The Mirage by Matt Ruff 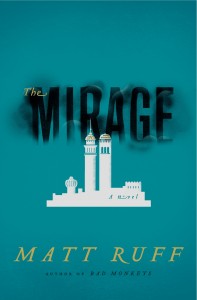 is a fascinating book. It takes a situation we are all familiar with and turns it on its head and inside out. The reader has to re-imagine the world, and every page seems to throw out some new twist to be absorbed. It’s one of those books that leaves you feeling like there are layers to the story you haven’t uncovered, while still being very readable and entertaining.

“11/9/2001: Christian fundamentalists hijack four jetliners. They fly two into the Tigris and Euphrates Word Trade Towers in Baghdad, and a third into the Arab Defense Ministry in Riyadh. The fourth plane, believed to be bound for Mecca, is brought down by its passengers.”

What if America was the rogue terrorist nation and the Arab states were the world power? What if Osama bin Laden was a war hero and Dick Cheney was a terrorist? What would an Arab superpower look like? And what if none of it was real?

The story is centered around three Homeland Security Agents: Mustafa, still grieving a wife who was lost on 11/9; Amal, the daughter of a prominent politician, working in a country where women are still struggling for basic freedoms; and Samir, a good agent hiding a potentially deadly secret. They are involved in the War on Terror, as it exists in this alternate reality, and they are asked to help investigate a mystery: terrorists and militants have been arrested. All of them spoke of a “mirage.” They claimed that the world around them was an illusion, that in the real world, America was the superpower, Muslims had carried out the terrorist attacks, they have artifacts that back up their story, and it appears that the government may be making them disappear.

Despite the weighty subject matter, this is a very engaging, entertaining story about cops chasing bad guys. The setting and the rules are different, but it’s a familiar story. The characters are interesting and surprising, and I enjoyed seeing the ways that they reacted inside this reality. (Could you have a female police officer in a part of the world where women still veil their faces and aren’t allowed to drive?) There are colorful bad guys, a lot of old-fashioned police-work, following leads and interviewing suspects, and the agents are fully aware that there are things going on behind the scenes — the bad guys aren’t the only dangers. But there are also a lot of layers to this story, and I found myself often feeling like I was missing something, like there was something I hadn’t quite grasped.

A lot of the groundwork in the story is laid out in entries from this reality’s version of Wikipedia, The Library of Alexandria: A User-Edited Reference Source. The entries provide explanations, background, even maps to help you make sense of the story. Those are pretty fun, at least in the beginning, as are the appearances of a lot of well-known names, but by the time Dick Cheney makes an appearance, near the end of the book, it was beginning to feel like overkill. The ending of the story wasn’t completely satisfying, but I still had a good time getting there.

My copy of The Mirage

by Matt Ruff was an Advanced Reader Copy, provided free of charge.

3 comments for “Review: The Mirage by Matt Ruff”