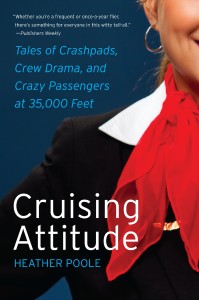 You know, these days I read travel books with a whole different eye. One, I’m usually reading them in an airport or a hotel. Two, the situations and places in the books seem very familiar to me now. That’s one of the reasons I was so interested in Cruising Attitude: Tales of Crashpads, Crew Drama, and Crazy Passengers at 35,000 Feet

— I see a lot of flight attendants in the course of a week’s work, and it looks like an interesting, exciting job. Like most jobs, though, it’s not quite what it seems.

Author Heather Poole was encouraged by her mother to apply for a job as a flight attendant — the job her mother had always wanted. That first interview was a complete failure, but after college and a few years spent designing watches, she tried again. Her stories of flight attendant training school were really surprising — they are tough on those students! The whole thing seems designed to wear them down and weed out the weak. That’s probably a good thing because the job itself is not for delicate flowers. The hours are long, the schedule is unpredictable and the people you meet are crazy.

Poole does a great job of working in stories about crazy passengers and other flight attendants without giving too much away:

“I may not remember her name, but on the descent into New York she told me all about her ex-husband, a pilot who cheated on her numerous times with other flight attendants, and whose former mother-in-law is trying to get sole custody of the children using her job against her. There was another man who never told me his name, but I do know his first sexual encounter took place with a man twenty years his senior and now he only has a thing for older men — with red hair. Just like the man sitting in 22B. I couldn’t tell you their names, but I do know they’ll be spending the night in jail because he punched her after she scratched his face for daring to call his wife in her presence as soon as the flight touched ground.”

And, of course, there are the celebrity encounters for the folks working in first class. That has to be one of the more interesting parts of the job. Poole talks about her time working on a private jet, the rich and powerful men that she met (and occasionally dated) as they were sitting in first class, and there are celebrity stories that read like gossip column blind items:

“So, here’s the galley gossip. He was one of the biggest pop stars of our time, and while he wouldn’t breathe the air at 35,000 feet without wearing a face mask, he had no problem scarfing down two first class meals…This actor known for having a thing for supermodels fell asleep with his hand down his pants in first class…The comedian who got kicked off of one of daytime tv’s hottest talk shows asked the pilot not to make any more announcements because her baby was sleeping…A Canadian who shot to the top of the music charts for her scathing lyrics wouldn’t allow a passenger in the window seat to pass by her in order to use the lavatory until quietly meditating with her first.”

I was really interested in the stories about the schedules and workload. As much as I travel now and the crazy schedule I keep, hers is so much worse! What they put flight attendants through ought to be criminal. The crazy hours, the backbiting, the competition for good flights — it’s all insane and one of those jobs you really have to love to put up with all of that.

This is a fun read for anyone who travels a lot. It gives you a whole new respect for the people serving your beverages (although after what she says about Diet Coke, I’ll feel guilty about asking for it!)  and pretzels. It’s certainly an enlightening read for anyone interested in a career in travel. I could have skipped a lot of the stories about her love life and personal life in favor of more travel anecdotes, but it’s generally a pretty good balance.

My copy of Cruising Attitude: Tales of Crashpads, Crew Drama, and Crazy Passengers at 35,000 Feet

is an Advanced Reader Copy provided free of charge.