I love guest posts on Fridays! Easy for me and a chance for you to read about what someone else is thinking. As we cruise along towards Halloween, I’m getting lots of emails about scary books. The Haunted Housewives of Allister, Alabama sounds more scary than funny, but a haunted painting is a great idea, and who can resist a little of The King:

When Cleo Tidwell said, “I do,” for the third time, she had no idea her marriage vows would be tested by a gaudy Velvet Elvis painting. But Cleo’s not the kind of woman to let a velvet-offense-against-good-taste just hang–oh no, she’s on a mission to oust the King. Trouble is, Elvis won’t leave the building. And he’s attractin’ all manner of kooks, fanatics, and lookie loos to Cleo’s doorstep. Everyone wants a piece of the painting, but Cleo’s starting to suspect that whatever’s haunting the Velvet Elvis wants a piece of her husband. Why else would her hubby trade in his car for a ’56 pink Caddy, moonlight as an Elvis impersonator, and develop a sudden hankering for fried peanut butter and banana sandwiches? Between the death threats, psychic warnings “from beyond,” kidnapping attempts, invitations to join the Blue Shoe Loonies, and even murder, Cleo’s fighting for her life, her marriage, and the perseverance of good taste everywhere.

Now, this is fun: the story was inspired by a discovery in the author’s own house! And here’s author Susan Abel Sullivan to tell us more about it… 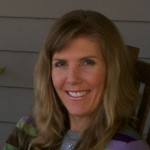 As a lover of all things dark and spooky, writing about a haunted painting only seemed natural. And my own lovely Victorian home even provided the inspiration. Upon moving in ten years ago, we discovered a framed, antique water color by Hendricks A. Hallett (1847-1921) hanging on the root cellar wall down in the unfinished and rather humid basement. Of course, this mysterious painting begged several questions: What was it doing in the basement? Why hadn’t the former owners taken it with them? Who had put it down there and when? And why on the wall of such an unpleasant basement? Trust me when I say my basement is not even remotely inhabitable on any level although it does possess a servants’ bathroom, and by bathroom, I mean an outhouse. (The only thing missing is a crescent moon carved in the makeshift door.) The basement floor is crisscrossed with partially submerged pipes. An ugly furnace takes up a good bit of space. The ceiling barely clears my head. Exposed pipes run overhead. The place smells of mold and damp. Nothing about the basement says store antique artwork here. I took these questions and wrote a draft of a novel titled The House Detective. But when I presented a few chapters to the Odyssey Writing Workshop in 2005, I was told haunted painting stories were a dime a dozen and to either scrap the idea or come up with a different slant. My workshop roomie introduced me to Janet Evanovich’s Stephanie Plum novels. I loved the fun, zany humor and wanted to try my hand at something similar but with a paranormal aspect. So I took those two ideas and asked myself: Okay, what would be funny about a haunted painting? The answer: If it were a black velvet painting of Elvis.