The Watercooler Effect: A Psychologist Explores the Extraordinary Power of Rumors by Nicholas DiFonzo 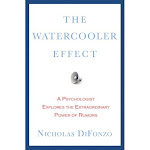 The Watercooler Effect is a very timely piece of work. It is, after all, election season. My inbox has been overflowing with forwarded bits of political “information,” most of it nonsense. I’d always believed this was primarily designed to sway my vote one way or another, but it turns out there may be other forces at work.

I was most interested in this book because of my interest in political rumors, and it is interesting to consider them in the light of some of the information presented here. For example, people spread political gossip not just to sway your vote, but also to reinforce their own status within the group; according to DiFonzo, “people are are not always primarily interested in the truth when they speak together, but rather to find ways to affiliate and bond with one another.”

Another interesting issue is that of fact-checking. I have often wondered why people who forward those viral emails don’t take a minute or two to check their facts. After all, who wants to look foolish, forwarding a hoax? Apparently, that is part of the answer: people don’t check their facts because they don’t want to embarass the person who sent them the rumor. (That has never stopped me, for the record. I am in favor of embarassing mass-forwarders whenever I can.) No excuse, in my opinion, for some of the dreck that gets passed around.

Generally speaking, this is an interesting and timely book, but you won’t find any startling revelations here. There are some interesting anecdotes and a lot of common sense information, including some techniques for managing the rumor mill that might be useful for those readers forced to deal with office politics.

My copy of The Watercooler Effect was an Advanced Reader Copy. You can order your copy here.

Do you know where the term “scuttlebutt” comes from? Check the comments for the answer!

New to my library…
And the winner is…