by Lisa on September 1, 2008 in Book Review, Literary Fiction • 0 Comments 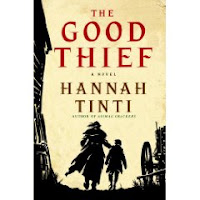 Twelve-year-old Ren is an orphan. He was pushed through the tiny gate at St. Anthony’s on a rainy night when he was just an infant and already his life had been more difficult than most: Ren was missing his left hand.

Despite that dreadful beginning, Ren’s life seems steady enough. He has a roof over his head, food in his belly, good friends – Ichy and Brom – for companionship. It’s not an easy life, but it is all he has ever known. Occasionally, boys leave the orphanage; babies taken home to fill an empty cradle, older boys for cheap farm labor. One day, a man named Benjamin Nab comes to the orphanage, claiming to be Ren’s brother. He tells a terrible tale of how baby Ren lost his hand in an Indian raid, and the monks see no reason to question it. Ren packs his meager belongings and sets off with Benjamin into a life of travel, adventure, danger and thievery.

This book engaged me from the very first pages and kept my avid interest all the way through. The characters are lively and boisterous, from Tom, the disgraced schoolmaster, to Mrs. Sands, the boardinghouse owner who SHOUTS ALL THE TIME because she’s hard of hearing. Ren manages, with the flexibility of the very young, to take everything that gets thrown at him, to adapt over and over to his new circumstances. Ren is, at heart, a good boy. He grieves when Benjamin steals a horse, not just because they have done something wrong, but because the farmer loved the horse and treated her well, and Ren knows Benjamin will not be as kind to her. He’s a clever boy and while he may have been raised in the church, he quickly learns to lie and steal when necessary.

The Good Thief managed to surprise me a bit with the ending; I’ll even admit to sniffling a bit through some of the last pages. Ren is the sort of character you feel drawn to, that you can root for, and all through the book I was hoping for a good ending for him.

My copy was an Advanced Reader edition; you can purchase your copy at Amazon.com.