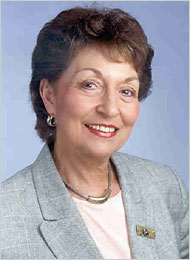 Somehow, I missed this news when it originally came out. I certainly didn’t recognize the name, and this is definitely a name that more people should recognize.

Judith F. Krug died earlier this month of stomach cancer. According to articles in the New York Times and Wikipedia, she led campaigns by libraries to fight the banning of books, and later fought efforts to limit children’s access to the internet. She even fought to guarantee access to books that she herself found offensive. The NYT article talks about The Blue Book of the ultraconservative John Birch Society. She said:

“Library service in this country should be based on the concept of intellectual
freedom, of providing all pertinent information so a reader can make decisions
for himself.”

In 1982, she helped to found Banned Books Week – something I celebrate every year – bringing attention to all sorts of books that the narrow-minded have attempted to ban.

I admit that I was not familiar with Ms. Krug until I read the article in the NYT and I am sorry about that. This is a woman I would have liked to know – I certainly respect her policy positions and I am grateful that there are people like her who are willing to fight for free access to information.

Review: Badlands by Richard Montanari
An Award for Me! The Premio Dardos Award