Review: The Book of Lies by Brad Meltzer

The Book of Lies is a tough review to write. There is so much going on, so many interesting side stories that I want to tell you about, but I don’t want to spoil the surprises you have in store. There’s Cain and Abel, a kid named Jerry Siegel, a dog named Benoni, a tractor-trailer full of melting shrimp, and the difficult relationships between fathers and sons. Add a healthy dose of mystery, ties to several real-life stories, and you’ve got The Book of Lies, a great mystery from a great mystery writer.

Cal Harper is a damaged man. When he was 9 years old, his family fell apart — a crazy mother, an angry father and one hard shove. He lost his job with the Customs Service when he tried to help a young woman who eventually betrayed him. Now, he spends his nights aiding other damaged people, picking up the homeless and getting them help. But one night, he comes across the one man he never expected to see: his father. He’s wounded and Cal cannot resist — who could? — the chance to find out more.

The encounter with his father leads to more mystery. Lloyd Harper was shot and the gun has its own startling secret: it can be traced back to a 70+ year old murder. In 1932, Mitch Siegel was shot with the same gun during a robbery, leaving behind a wife and six children. The youngest of those children, Jerry, was an artist, and in their suburban Cleveland home, Jerry Siegel created one of the most well-known comic book characters of all time: Superman.

Lloyd Harper is behaving strangely and his estranged son wants to know why. His curiosity leads to muder — with all the evidence pointing to Cal. The only way out is for Cal to find the real killer, which means tracking down a book that may contain the secrets to the very first murder.

In chapter four of the Bible, Cain kills Abel. It is the world’s most famous murder. But the Bible is silent about one key detail: the weapon Cain used to kill his brother. That weapon is still lost to history.

The mystery leads Cal, Lloyd and Lloyd’s friend Serena from Florida to Cleveland, Ohio. To a modest house in the suburbs — the house where Superman was born: 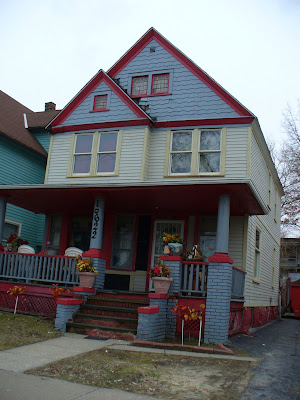 Their quest is full of twists and turns. They are being hunted by a ruthless killer named Ellis, although they don’t exactly know why. Ellis is in contact with The Prophet, a shadowy figure who is orchestrating the hunt — and who may be closer than they think. I read the book in one long sitting and it kept me turning pages right up to the end. The final scenes bring all the disparate pieces of storyline together beautifully. This book was a terrific thrill ride.

The stories in the book about Superman are true and author Brad Meltzer knows them well. He founded an organization called Ordinary People Change the World to raise money to save the house in the picture above, the house where a kid named Jerry Siegel, who desperately missed his father, created the world’s most powerful superhero. He began researching The Book of Lies as a way to solve the mystery surrounding Mitch Siegel’s murder. There are many other bits of historical fact (as well as some interesting supposition) in the book. It’s not exactly historical fiction, but it’s a fast-paced, interesting story with enough grounding in real-life mysteries to send me Googling and surfing Wikipedia. I love it when books have that effect!

Brad Meltzer is the author of seven novels and four comics. (I loved the quote on his Comics page: “Every teenage boy has two fantasies: writing a comic book…and dating a Playboy centerfold. Only one of them is actually worthwhile.” I wonder which one he meant…) He has even created a soundtrack for the novel – the first time I’ve ever run into that.

I won my copy of The Book of Lies in a giveaway sponsored by Bermudaonion’s Weblog.

Abandoned Books
New to my library…

3 comments for “Review: The Book of Lies by Brad Meltzer”