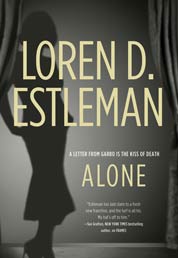 Alone by Loren D. Estleman is a marvelous mystery about the movies. Film archivist Valentino (no first name necessary with a last name like that) specializes in hunting for lost classics and convincing their owners to donate them to the UCLA film school. He doesn’t mean to keep getting mixed up in murders, but with this cast of crazy characters, interesting things are bound to happen.

Valentino’s life is a bit of a mess at the moment. He’s trying to rebuild a much-loved but rundown old movie house, The Oracle, and he has come up against one devil of a building inspector. He’s been kicked out of his temporary apartment at the theater and is rooming with his crazy colleague, Professor Broadhead (eggplant margaritas at 3:00 am, anyone?). His buddy, Matthew Rankin, has gotten himself into a real mess — he confessed to Valentino that he was being blackmailed by his assistant, Roger Akers, and shortly afterwards Akers is dead and Rankin is holding the smoking gun. And through it all, the question: did the legendary Greta Garbo really write love letters to Rankin’s wife? The big confession takes place at a party honoring Greta Garbo. Valentino’s girlfriend, Harriet Brown, has a real shot at first prize in the lookalike contest:

Harriet was approaching. The legendary head shot of Greta Garbo, full face, in the identical Mata Hari headdress, hung on the wall behind her; she seemed to be coming out of the frame.

The resemblance is so strong that the host, Rankin, faints. Valentino stays with him while he recovers in his office, and they have a chance to talk about Rankin’s predicament: Rankin’s wife was a close friend of Garbo’s and they corresponded for a number of years. Rankin’s assistant, Akers, has gotten his hands on some of those letters, and they are steamy, to say the least. Not wanting his wife or her famous friend dragged through the mud, Rankin has been paying the blackmail, but he wants Valentino’s help with something that may help him get out from under. The next time they meet, Akers is dead on the floor.

What follows is a twisty little mystery, full of loony characters and film fantasies. Valentino is in deep trouble at The Oracle — the building inspector seems determined to keep the project from moving forward and has insisted that he can no longer live on the premises. Valentino moves in temporarily with his colleague, Professor Broadhead, but that’s not going to last. The crazy old coot is up at all hours and they are bound to clash over his very young girlfriend, Fanta. And his involvement in the murder case has gotten Harriet in trouble with her boss — quite a big deal, since Harriet works for the police department. And he would love to get a peek at those letters!

The film asides in this are terrific — Valentino is pretty opinionated about the movies, as you might expect:

With updated settings and costumes, full color, and a soundtrack, the film might have succeeded in any modern first-run movie house; but only with Garbo in the lead. Compared to her performance, Julia Roberts, Reese Witherspoon and Halle Berry did little more than make faces at the camera.

I learned more about Great Garbo reading Alone than I expected. There’s a bit of film history, a bit of gossip, all told by someone who obviously loves old movies. I’ve recommended this, along with Valentino’s first mystery, Frames, to a few film buffs for their Christmas lists. Movies, murder and mayhem make a magnificent combination.

Alone was released on December 8, 2009. My copy was an uncorrected proof provided for review purposes.