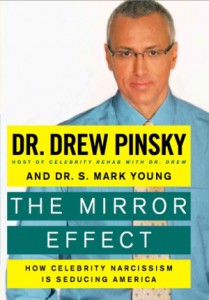 Who better to talk about celebrities than Dr. Drew? For more than 25 years he has co-hosted Loveline on the radio and, for 4 years, on MTV. On VH1, he produces and hosts Celebrity Rehab with Dr. Drew and Sober House. He is definitely an expert on celebrity behavior, and this book is full of anecdotes and descriptions of the famous and the famous-for-being-famous. But where most of see spoiled, self-centered celebrities acting like brats, Dr. Drew sees damaged, suffering people. It’s an entirely different take on the bad behavior of our favorite stars, as well as a look at what it might be doing to us and to our children.

In Greek mythology, Narcissus fell in love with his own reflection, and narcissism is usually defined as self-love or egotism. But the point of the story is that Narcissus didn’t recognize his reflection as himself; a true narcissist, according to Dr. Drew, “is dissociated from his or her true self; he feels haunted by chronic feelings of loneliness, emptiness and self-loathing and seeks to replace that disconnection with a sense of worth and importance fueled by others.” Using that definition, it seems obvious that narcissists would seek out the spotlight — not out of self-love, but as a way to fill the emptiness, a way to soak up the attention and approval they need as reassurance.

“The mirror of celebrity reinforces every narcissist’s belief that a world of constant admiring attention is possible: All you need to do is act sexy, play the diva, demand privileges and party with abandon.”

In the days of the studio system, stars were pampered and protected, their image was carefully constructed, the reporters played by the rules, and bad behavior was hidden or punished. Today, instead of hiding it, stars and wanna-be stars use provocative behavior to get the attention of the press and an image can be as easily built on an illicit sex tape and a drug addiction as on an Academy Award. After all, the internet is full of blogs and gossip sites, where readers flock for the latest pregnancy rumors, rehab respites and celebrity crotch-shots. For a narcissist, the old adage rings true: any publicity is good publicity. As long as people are talking about them, they don’t care what those people are saying.

The book also addresses the reality tv phenomenon: what makes people sign up for that sort of public humiliation and what makes us watch it. That chapter actually made me feel a little dirty; it’s one thing to laugh at someone playing the fool, but when you begin to see the desperation behind their actions, you feel less like laughing.

The authors seem most concerned about the effect this has on “the most vulnerable audience”: teens and young adults. We are more connected to our favorite stars than ever before; where once they existed only in the glossy pages of magazines, now we see them in supermarket tabloids and follow them on Twitter. As young people feel they have “friended’ their favorite celebrities, they also begin to copy their behavior. And that mimicry becomes its own sort of celebrity on shows like My Super Sweet Sixteen. The book outlines steps that parents can take to protect their kids and undo some of the damage.

Over a 2-year period, Dr. Drew and Dr. Young surveyed celebrities who appeared on Loveline with the Narcissistic Personality Inventory (NPI). Several stars agreed to have their survey results published; Dr. Drew’s score falls right in the middle of the pack…and he has the same NPI score as adult film star Ron Jeremy. Throughout the book, Dr. Drew’s intimacy with the stars keeps the text from getting dry. Points are illustrated with stories we are all familiar with. In a few years, those stories may make the book seem dated, but right now it has an immediacy that keeps you turning the pages. It’s not as much fun as this month’s issue of People, but definitely more educational.

Win A Free Book!
Review: Michael Symon’s Live to Cook: Recipes and Techniques to Rock Your Kitchen by Michael Symon