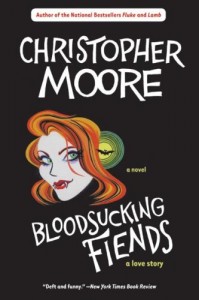 The vampires are everywhere these days!  I thought I had called for a temporary ban on vampire books, then I found this one in my suitcase on my last trip (and in my carry-on for this week’s trip: Let the Right One In

by John Ajvide Lindqvist — saw the movie and had to read the book).  But Bloodsucking Fiends: A Love Story

is different.  It’s a hilarious send-up of vampire stories and modern romance.  What does your average girl do when she wakes up a vampire?

Jody never asked to become a vampire.  She is waylaid on her way home from work by an ancient and powerful vampire, who leaves her under a dumpster in an alley for a couple of days to recover.  When she gets home, she finds a boyfriend more pissed-off than worried — he is obviously no good in a crisis, since the sight of her burned hand leaves him rocking and hugging himself in the corner.  Thankfully, ol’ Ancient Evil left Jody a grocery bag full of cash.  She’s going to need it, since she’s out of a job and, apparently, will need to find somewhere else to live.

Tommy is an aspiring writer from Incontinence, Indiana, come to the big city to make his fortune — or at least jump-start his writing career.  He is befriended by the Emperor, a fixture around the city, a homeless man with two dogs who seems to be revered by the city residents.

Tommy was startled out of his reverie by a screeching war whoop.  He looked up to see a Rollerblader in fluorescent pads and helmet closing in on him at breakneck speed.  An old man, who was sitting on the sidewalk ahead feeding croissants to his two dogs, looked up momentarily and threw a croissant across the sidewalk.  The dogs shot after the treat, pulling their cotton-rope leashes tight.  Tommy cringed.  The Rollerblader hit the rope and went airborne, describing a ten-foot arc in the air before crashing in a tangle of padded limbs and wheels at Tommy’s feet.

“Perhaps you should slow down on the sidewalks,” the old man called.

“Safety first, son,” the old man said with a smile.

The Emperor hooks Tommy up with a job as the night manager at a grocery store, where the most important question in the interview process seems to be “what do you throw?”  Tommy’s answer (a 12-pound Butterball) and his obvious familiarity with the great sport of frozen turkey bowling, is all he needs to make friends.   On the job, he meets Jody — beautiful, red-headed and newly undead — and that’s where his life really takes a bizarre turn.  Soon they are shacked up in the loft of his dreams, they’ve got great furniture, they’re having great sex — so why does she want him to go to Sears and buy the biggest chest freezer they have?  She doesn’t even eat – what could she possibly need to store in there?

The books is great fun.  All the little complexities of life as a new vampire (how do you pick up your last check from your old job when you can’t get there during business hours?  what do you do when your mother wants to come for a visit?) and the start of a grand new romance, all rolled up with ancient evil, crazy homeless guys and stoned slacker buddies.  It was a perfect airport read, but I am looking forward to something a little meatier.

My copy of Bloodsucking Fiends: A Love Story

was purchased at Joseph-Beth Booksellers in Cleveland.