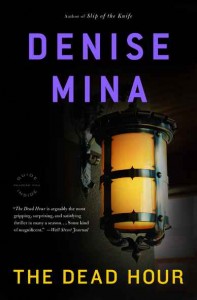 Paddy Meehan is probably the most flawed heroine I’ve read in a while. By page 10 of The Dead Hour

, she has already taken a bribe. She lies, she has an affair with a married man — but in her own way, she’s trying to do the right thing. Her way is just a bit roundabout.

Paddy is a reporter for the The Scottish Daily News, working the late-night police beat. At the scene of a domestic call, she sees a bloodied woman through the doorway. The cops seem to be convinced the fight is over, and when the husband shoves a 50 quid note through the door and tells Paddy it’s important this stay out of the papers, she takes the money. The police don’t make an arrest, everyone goes away with a little money in their pockets, and the next day, Vhari Burnett, the bloodied woman, is dead.

Paddy prints the story anyway, but now she’s in a fix: there will be a police investigation and how can she keep her job and admit to taking a bribe? She sees right away that the police officers are covering it up — they haven’t mentioned certain snippets of important information, and when Paddy brings them up, it’s cause for an official inquest…and a lot of hostility from the other officers. Paddy can’t seem to let this investigation go. She’s driven by her feelings of guilt over Vhari’s death, by her anger at the police department for covering the whole thing up, and by a desperate need to come up with a hot story to keep her job. The economy is in a bad way, unemployment is rampant and Paddy is the only person in her family who’s working. If she can’t catch the eye of the new editor, she may be be out on the street before she can wrap up the biggest story of her career.

Woven through this is the story of Kate — a young woman on the run, slowly but surely destroying herself. It takes a while to learn the full extent of her crimes and to place her in the bigger picture, but she’s such a trainwreck that you can’t look away. Giving into an addiction-driven impulse may prove deadly, and she may be the last link to Vhari’s killers.

This took me a while to get into, mainly because I had a little trouble getting to like Paddy. Her first act in the book is so destructive, and her first lies so cowardly, that it put me off a bit. I’m glad I stuck with it, though: eventually, you get to know Paddy, and it’s hard not to like her a little. She’s a brave young woman, even if it doesn’t show up right away. Her friends and family are quite a flock of characters and I loved their stories. The ending provides quite a cliffhanger for the next book (although didn’t anyone else really see that coming?).

Denise Mina has written 7 novels, 2 plays, 2 comic books and a list of short stories, radio plays and articles. On her website, she apologizes for the lateness of the current update: “When I haven’t been working or having babies I’ve been watching DVDs and eating toast and wishing I could sleep for longer than four hours at a stretch.” Sounds like a busy lady. She’s based in the UK and I was unfamiliar with her work, but I will be putting her on my “I wonder if they have something by…” list, for afternoons spent browsing my favorite bookstores.

My copy of The Dead Hour

was loaned to me by a good friend with excellent taste in fiction.

3 comments for “Review: The Dead Hour by Denise Mina”