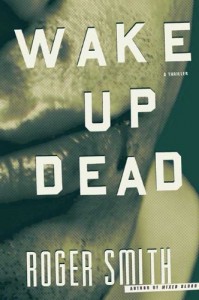 If you have a weak stomach, this book is not for you.

is probably the most violent, bloody, gore-splattered book I’ve read in ages, and that’s really saying something.  A gang war in Cape Town, South Africa’s ghettos provides the setting and the gang-bangers, drug lords, junkies and an honest-to-goodness cannibal provide the action.

On a steamy night in Cape Town, Roxy and Joe Palmer have dinner with a cannibal and his Ukranian whore.  On the way home, they’re carjacked.  Joe is shot in the leg and, in a panic, the carjackers drop the gun and take off in Joe’s car.  What Roxy does next will cause more bloodshed than she can possibly imagine.

Joe is dead and Roxy is being blackmailed by the carjackers, Goddy and Disco.  Disco spent a few years in prison where he became the “wife” of Piper — crazy, bloodthirsty, uber-violent convict who will never set foot outside the walls of Pollsmoor Prison…unless it’s to bring his “wife” home.

Billy Afrika, also known as Barbie (quite a story behind that), is an old enemy of Piper’s.  He’s a former cop turned mercenary, trying to protect his former partner’s widow and kids.  His last job as a merc was working for Joe Palmer.  He didn’t get his last paycheck, and he is out to collect that $30,000 from Joe or his widow or anyone else associated with the Palmers.

Ernie Maggot is an honest cop.  He knows there is something hinky about Joe’s death, he just can’t find a way to pin it on anyone.  His superiors have their own problems: a serial killer, chopping off the heads of blond women in the wealthy beach-front neighborhoods.  But Maggot (seriously – Maggot?  How did he survive 7th grade with a name like that?) is convinced that Roxy and Billy are up to no good.

Then there’s Doc, a drunken doctor who lost his license and patches up gangsters and sells body parts for muti; Popeye, the local tik dealer; Manson, perfectly named, who might be even crazier than Piper, and a host of other characters with street names, hand guns and pipes full of meth.  By halfway through the book, I was fairly certain they were all going to kill each other and I was ready for it to be over.

I had sympathy for exactly one character in the book: Robbie.  Robbie is Detective Maggot’s six-year-old son, dumped on him by a soon-to-be ex-wife who is off on a bender with her new boyfriend.  A little boy with a teddy bear who is about to have the worst birthday of his young life.

The publisher describes it as “uncompromising” but I would be more likely to say “unrelenting”: I would be surprised to find a chapter in which there wasn’t a shooting, stabbing, evisceration or beheading; at there very least, there is plenty of vomit and blood and a few prison rapes thrown in for variety’s sake.  I’m a pretty unflinching reader, but I found it to be too much.  If everyone spends every page stabbing and shooting and raping and looting, there’s just no way to metabolize it all, to feel anything about any of it.  Fans of urban noir will enjoy it, but the overload of violence just left me numb.

My copy of Wake Up Dead

New to my library!
Teaser Tuesdays!

5 comments for “Review: Wake Up Dead by Roger Smith”