Review: Mistress of the Art of Death by Ariana Franklin 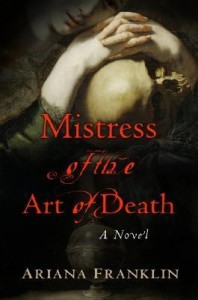 Historical fiction can be challenging, both for writers and readers. It doesn’t take much — just a word, a name, a description — to bounce you right out of the story. In the Author’s Note at the end of Mistress of the Art of Death

, Ariana Franklin says “It is almost impossible to write a comprehensible story set in the twelfth century without being anachronistic, at least in part. To avoid confusion, I have used modern names and terms.” Still, she manages to evoke a sense of the time that had me completely swept up in the story. It’s an excellent combination of a compelling story, interesting characters and the romance of an earlier time.

Mistress of the Art of Death is set in medieval Cambridge. Four children have been murdered in bloody, sadistic fashion and the local Catholic community is blaming the Jews. After beatings and lynchings, the Jews have holed up in the castle of King Henry II and Henry is none too happy about it; he depends on the income from his Jewish usurers and merchants. He decides to contact his cousin, the King of Sicily, to ask for help. The assistance comes in an unexpected form: Simon of Naples, a fixer and investigator for the King; Mansur, a eunuch; and Adelia — or more precisely, Vesuvia Adelia Rachel Ortese Aguilar of Salerno — a doctor of death.

Simon, Adelia and Mansur set out to clear the Jews of suspicion and solve the mystery surrounding these murders. No one is informed of their mission and they have no official standing, so they must rely on their wits and the friends they make to provide inroads and information. They are able to assist the head of the local monastery, Prior Geoffrey, with a rather personal medical problem, and he is an invaluable resource for them. He introduces them to Gyltha, who becomes their housekeeper, and her grandson, Ulf, who becomes Adelia’s chief spy-about-town.

Their killer is crafty as well as brutal. Although their investigation reveals the ruse he uses to lure the children to their deaths, the trio cannot get quite close enough to catch a glimpse. And Adelia is at a grave disadvantage: although in Salerno it is possible for women to study medicine, in England, a woman with medical knowledge would be condemned by the church and likely hanged as a witch. She has to be very careful who she confides in.

I found the story fascinating; it was Criminal Minds or CSI set in a time when people believed that disease was caused by demons and the church condemned the use of painkillers as heathenish. Adelia is a very modern woman — she is single (with no plans to marry), educated, independent. There is a constant clash between the Church, the King, scientific discovery and religious superstition. Adelia may bring a wealth of medical knowledge to the table, but she is ignorant of the local people and their way of life. She must rely on Ulf and his understanding of local life, that strange underworld that children inhabit, to provide the insights that move their investigation along.

Many reviewers disliked the romantic sub-plot, and I must admit that I was not thrilled with it myself. I would have liked to see Adelia be as modern about her love life as she was about her education, or see it dropped altogether. It seemed to diminish her in some way, by insisting that under all her modern notions, she was still just a maiden who could let love cloud her judgment. It was my least favorite part of the plot.

The story is based on the real-life tale of Saint William of Norwich. William was 12 years old when he was murdered, and his death was attributed to local Jews, who were alleged to sacrifice Christian children during their sacred rituals. The murder and the fact that the King and local authorities protected the Jews fueled anti-Jewish feelings among the peasant class and resulted in the attack on the Jewish delegation attending the coronation of Richard the Lionheart, son of King Henry II.

This novel was particularly well-suited to being an audio book. The reader, Rosalyn Landor, has a marvelous voice and a lovely accent. Many of the medieval terms and place-names were unfamiliar, so a good reader was a real asset. My copy of Mistress of the Art of Death

was provided by my local library.

7 comments for “Review: Mistress of the Art of Death by Ariana Franklin”