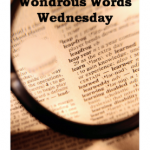 Happy Wednesday!  Time for new words — check out other Wondrous Words posts over at BermudaOnion’s Weblog.

I only had one new word this week, from my latest book, The Devil’s Star

by Jo Nesbo.  This was a completely new word to me, and I bet it’s new for most of you, too:

1. Dysosmia: impairment of olfactory stimuli processing, which can present in a variety of ways, such as the stimuli not activating the olfactory bulb, some odors being interpreted as other odors, or hallucinations of smells.

“Dysosmia, it was called, according to the book Harry had borrowed from Aune, the Crime Squad’s resident psychologist.  A condition of the brain when it refused to recognize some smells…”