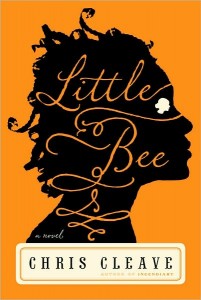 is the sort of book I find hard to review.  I want everyone to read this book — I want to tell you enough to encourage you to run out and put this on your wishlist.  What I don’t want to do is spoil the story, and if I tell you too much, I will.  The story at the heart of this amazing book is revealed slowly, piece by piece, a word here, a hint there.  There is a certain build-up to the story that could be easily derailed and I don’t want to do anything to take away from your enjoyment.  Author Chris Cleave has crafted a novel that literally took my breath away — confrontations that were like physical blows and passages that burned in my chest and made it hard to breathe — and I want you to enjoy the build-up as much as I did.

We first meet Little Bee in a detention center in London.  We don’t know how she got here; we don’t know why she’s being held.  I found her comments on the Queen’s English and pound coins and the people around her fresh and charming, but then she would say something to remind you that she had a backstory, and it wasn’t a pretty story.  Little Bee spends her free time figuring out ways to kill herself; you never know when the men might come for you and you have to be ready.  She has figured out ways to kill herself in every situation — from the medical wing of the detention center to a movie theater to a garden party with the Queen.  She chooses her meals based on these plans:

“I started asking myself questions like: Which will make me stronger for the act of suicide?  The carrots or the peas?“

We also meet Sarah.  Sarah is a magazine editor, she has a four-year-old son named Charlie who refuses to take off his Batman costume, and her husband, Andrew, has recently died.  Her life is a bit of a shambles and she has more than enough on her plate already when Little Bee shows up at her door.  This is not the first time they’ve met, but it will be a little while before we can work our way back to a terrible, life-changing confrontation on a Nigerian beach.  Little Bee has already changed the course of Sarah’s and Andrew’s lives, and she is about to push them off course yet again.

We also had a TV, but in [our village] there was no reception and you had to make the programs yourself.  Our TV was just a wooden frame around where the screen used to be, and the frame sat in the red dust underneath the limba tree, and my sister Nikura used to put her head inside the frame to do the pictures.  This is a good trick.  I know now that we should have called this reality television.

That’s really all I think I can tell you about the plot.  To say any more would reveal these characters’ secrets out of turn, out of context.  It would loosen the knot that I felt build in my stomach as I picked up each new hint, as each conversation brought some new piece of information.  You want to know what has happened, but you are also dreading it.

Throughout the book, Little Bee has a sort of informed cheerfulness that made me laugh.  No matter what she’s been through, she is still a little awestruck by the bustling London streets.  It’s easy to forget how young she really is.  But she is not some Pollyanna; more than any other character, she has a good idea how this story is going to end for her, but she doesn’t shy away from it.

was originally released in the UK as The Other Hand.  This is Chris Cleave‘s second novel.  His first book, Incendiary

, tells the story of an al-Qaeda bomb attack on a London soccer match.  It’s presented as a novel-length letter from an outraged mother to Osama bin Laden.  My copy of Little Bee

was loaned to me by my friend, Ari, who has exceptionally good taste in books.