Review: The Book of Matthew by Thomas White 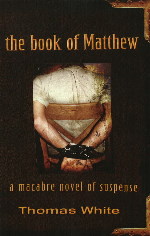 The prologue will give you nightmares. (Do you know what sort of sound human vertebrae make when they give way under pressure?) Other sections of the book made me want to cover my eyes and read through my fingers. The killer in Thomas White’s The Book of Matthew

would give Hannibal Lecter a run for his money. This is not a book for readers with weak stomachs or those prone to nightmares. Not a lot of outright gore — I’ve certainly read bloodier books — but the sort of enlightened cruelty that makes you double-check the locks before turning in for the night. Not that locks would save you.

Angie Strachan is a real estate agent. She has an odd but friendly relationship with her not-quite-ex husband. She comes from a family of cops and once upon a time she had ambitions of her own in the police department. That all came to an end when Angie came face to face with a monster — a monster the police couldn’t stop. She made a choice that saved lives but ended her career. Now, years later, she’s a member of the Police Reserve — basically unpaid grunt work for the San Francisco Police Department — and she’s about to get drawn into another media circus, hunting another monster.

Clemson Yao is the lead detective on the case. He’s already troubled by nightmares (mutant bugs and The Engine, churning up bodies and lost souls) and this case isn’t going to help. Their killer is very smart and the murders are planned to the smallest detail. The first crime scene they find is based on the favorite execution method of a rajah in Jaipur in the early 1700s. He draws inspiration from the Malleus Maleficarum, The Witch Hammer, a famous treatise on the interrogation of witches, written in 1486. He uses unusual implements, obscure poisons, leaves witty clues at his crime scenes. What his methods all have in common is extraordinary physical suffering and emotional anguish, the sort of torture that gives seasoned cops nightmares.

The SFPD gets a bad rap in this book. There is a lot of talk about low solve rates, incompetent detectives, promotions and prime job assignments decided by seniority rather than skill and a union that rules it all with an iron fist. I sincerely hope that is just artistic license on White’s part; if not, he really knows how to hold a grudge.

It seems strange to say that I enjoyed a book about torture and murder, but I did. I generally avoid the torture-porn movies (the first Saw was terrific, but I didn’t make it through Hostel); maybe it is easier to read than to watch. I loved the twists and turns of the story. I love mysteries and detective fiction, but I hate it when the answers are too pat, too obvious. I enjoy the stops and starts, the dead ends, the leads that could go in any number of directions; those are the investigations that feel more real. In The Book of Matthew, detectives have a lot of information to sift through, crimes that may or may not be related, clues left by the killer, and not everything takes them in the direction they think they should be going. It makes for interesting reading and a story that keeps you guessing, my favorite kind of mystery.

My copy of The Book of Matthew

was purchased from Amazon.com.

5 comments for “Review: The Book of Matthew by Thomas White”