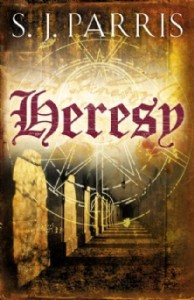 These days, we talk about Banned Book Week and we talk about censorship in school libraries, but in the 1500’s, they were serious about censorship. Get caught reading something on the Vatican’s Index Librorum Prohibitorum (List of Prohibited Books) and your prize was an appointment with the local Inquisitor. Based on the true story of Giordano Bruno — an Italian monk, excommunicated and on the run from the Inquisition — Heresy, by S. J. Parris, casts Bruno in the role of investigator, helping to solve a series of grisly murders while spying for Queen Elizabeth.

Giordano Bruno did, in fact, lecture at Oxford University in 1583, and many of the characters in the book are known to history as well. Sir Philip Sidney, Sir Francis Walsingham, John Underhill, John Dee — they all played a part in history, as well as in Heresy. Bruno accepts the invitation to a debate at Oxford to expound on his theories of an infinite universe of independently moving heavenly bodies (ahead of his time). He is also approached by Sir Francis Walsingham, Secretary of State to Queen Elizabeth, and asked to do a little undercover work. The Queen is concerned about the possibility of renegade Catholics at Oxford. This was shortly after the publication of Regnans in Excelsis, the papal bull issued by Pope Pius V declaring Queen Elizabeth a heretic. There was good reason to believe that Catholic forces might make an attempt on the Queen’s life and strong measures were taken to discover and arrest them.

I was very much caught up in the history of the novel. I could add dozens of links, telling more of the story of Bruno’s life, the Pope’s declarations against the Church of England, the Inquisition and more. It is hard to imagine living in the political climate of those times — Bruno had actually been condemned for reading the work of Erasmus in the privy — when people could be tortured and condemned to death, simply for reading works the church had deemed dangerous. One of the great successes of this story is that characters on all sides of the debate seem sympathetic. While Bruno has every reason to consider himself an enemy of the Pope and the Catholic Church, he has serious reservations about arresting people because of their manner of worship, or declaring anyone who is Catholic a mortal threat to the monarchy. He is troubled by these issues throughout the book.

The mystery is an interesting one: a man is savaged by a wild dog in a locked garden. Who let the dog in? Who was the man meeting and why was he carrying a substantial sum of money? And why does the method of the murder seem so familiar to Bruno? The Rector, John Underhill, is primarily interested in saving the reputation of the college, and if it means a murderer goes free, so be it. But bodies begin to pile up and soon no one can discount Bruno’s theories. There are a number of interesting subplots, a little romance, and plenty of history to keep a reader entertained.

In life, Bruno was eventually turned over to the Inquisition and died a tragic death. On the 400th anniversary of his execution (he was burned at the stake), the Vatican declared it a “sad episode”, all the while defending his torturers as good Catholics who wanted to “promote the common good.”

S. J. Parris is the pseudonym of journalist Stephanie Merritt. This is her first novel — and I will be adding her to my must-read list. Good historical fiction is a special pleasure — educational as well as entertaining — and this was an excellent example. You can find more about S. J. Parris and Heresy at the publisher’s website, Doubleday.com.

My copy of Heresy was an Advance Reader Copy, provided free of charge.

“A Thousand Words”
Review: The Book of Matthew by Thomas White