Review: The Transformation of Bartholomew Fortuno by Ellen Bryson 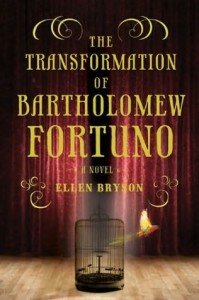 What makes someone a freak?

by Ellen Bryson.  The story revolves around P.T. Barnum’s American Museum and the “freaks” who entertained the masses there.  There were midgets and fat ladies, savages from exotic lands, musclemen and other oddities.  But what made them freaks, and what would they choose, if they could choose another fate?

Bartholomew Fortuno is the Thinnest Man in the World.  After a very unpleasant stretch in the tent circuses and traveling shows, he has found a home for himself at the American Museum.  He spends his day on-stage, showing his ribs and ankles to the paying customers, or sitting in tableau with his lady friend Matina, the museum’s fat lady.  His meals in the museum’s dining hall explain how he maintains his “gift”:

As usual, I counted out a dozen green beans, no more, no less, and placed them horizontally on my plate, along with a bit of horseradish to add zing.  After cutting each bean into thirds, I dipped a piece into the horseradish and popped it into my mouth, chewed twenty-five times before swallowing it, then started on the next piece.

Fortuno has his theories about his profession — he truly believes that his thinness is a gift, that it educates and enlightens the people who come to see him. He explains the difference between the True Prodigies, the regular Prodigies, the Exotics and the Gaffs.  He treats his performances as a higher calling, no matter what his fellow performers believe.

Their lives at the museum are less exciting than one might think.  They have their daily schedules, they have the little dramas of any group living in close quarters, they measure their worth in special performances and new costumes, with plenty of jealousy and gossip to go around.  All this intensifies with the arrival of a new act — an act so secret that she arrives under cover of darkness and is not housed with the rest of the performers.  Fortuno is fascinated, and when Mr. Barnum asks him to perform a small favor for him, he is sucked into the whirlwind surrounding their newest prodigy.

The novel explores Fortuno’s relationships with his fellow freaks as well as his past.  Is he naturally a Prodigy, or did he choose this?  I mean, a person can be naturally thin without subsisting on a dozen green beans a day.  And if it is a choice, conscious or unconscious, what would prompt a man to choose to be a skeleton?  Fortuno has to work out the answers to these questions while walking through the minefield of Mr. Barnum, Mrs. Barnum and the mysterious new exhibit.

I enjoyed the backstage look at life in a very high-end freakshow.  The were so normal and yet so unusual, the way they argued and envied each other, the way they had adapted to — and even grown proud of — a life on the fringe of society.  The mystery unravels slowly (sometimes too slowly), as Iell reveals her secrets and Fortuno deals with his past and his future.  He clearly did not see what he was getting himself into, even if the reader can sense his impending disaster.  He is a marvelous narrator, a man of such dignity, even in his odd circumstances.  I found myself rooting for him, hoping he could find a clear path.

Ellen Bryson‘s novel was inspired by a dream; Iell was a character in that dream and Bryson’s investigations led her to the story of Isaac Sprague, the living skeleton: 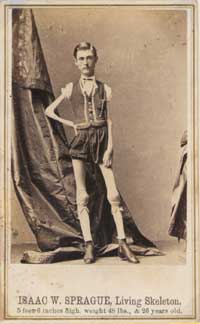 She knew immediately that he would be her narrator.  You can find more photos of Sprague’s cohorts here.

This is Bryson’s first novel, and is scheduled for release June 22nd.  My copy of The Transformation of Bartholomew Fortuno

1 comment for “Review: The Transformation of Bartholomew Fortuno by Ellen Bryson”