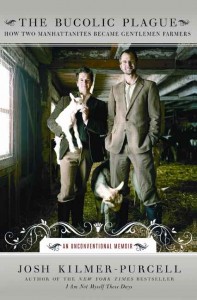 I love a good memoir! I tend not to enjoy celebrity memoirs as much as I do those books written by relatively ordinary folks who have lived really interesting lives. I’ve reviewed a number of them over the last few years, but The Bucolic Plague: How Two Manhattanites Became Gentlemen Farmers

is by far the funniest — from the title, which would have made me pick it up all on its own, to Josh’s thanks to Martha Stewart in the Acknowledgments. I started out marking funny passages that I might want to share in this review, but the book quickly became a forest of pink and green Post-It flags.

The names of some characters have been changed, and some are composites of various people, experiences and conversations I had then. If you think that’s unfair, you’ve obviously never lived in a small town and written a memoir about your neighbors.

Josh and Brent are partners, living in Manhattan. During their annual apple-picking weekend, they come across a For Sale sign that changes their life. The Beekman Mansion, built in 1802 by William Beekman, is a lovely, historic place. It has been lived in, abandoned, restored and left unoccupied, but Josh and Brent have no problem seeing the potential. Before they’ve even gotten the realtor on the phone, Josh is imagining their life as gentlemen farmers:

I was already imagining my life at the Beekman Mansion. I concluded that Brent and I would probably be known as the Beekman Boys. Or at least I hoped so. It would be far better than, say, the Fag Farmers.

Both of the (future) Beekman Boys grew up in rural areas, so they aren’t complete strangers to life on the farm, but it has been a long time since they have done any digging in the dirt. Josh is in advertising and his previous career (as a drag queen) and relationship (with a male escort) is not really adequate prep for the role of a Gentleman Farmer. Brent is an MD with an MBA and a familiar face to fans of Martha Stewart as Dr. Brent, her health and wellness expert. Also not farmer material, at least on the surface. Still, they start off determined to breathe some life into the place.

Owning a farm, I felt, would at least bring me back in the direction of my Wisconsin roots. I could grown my own food, support a hard-hit local economy, and metaphorically raise my middle finger at the factory farm industry that was causing so many of our nation’s ills…

At first, the farm is a weekend getaway. They take the train in on Friday nights, armed with a long list of chores, and 48 hours later, they are on the way back to the rest of their lives, in the city. The holiday season means a Thanksgiving dinner made entirely of food grown on the farm, right down to the Thanksgiving turkey, which Josh kills and cleans himself, learning some valuable lessons about the importance of good aim and the usefulness of a bottle of Absolut and a turkey baster.

After a while, weekends aren’t enough. Josh begins to dream about finding a way to quit his job in advertising and live on the farm full-time. That means finding a way to make the old farm profitable, and Brent’s office Christmas gift to Martha — a bar of goat milk soap — provides the seeds of a business plan. These guys have great contacts (come on – Martha Stewart!) and plenty of business sense, but launching the business and keeping it afloat might be more than they can handle.

The book is full of great stories about the farm, the goats, their neighbors, their roosters and their zombie flies. They are overwhelmed by work and their new business; they have to find ways to balance their lives in the city with their lives on the farm. When business is booming, their relationship suffers (I had to remind myself that there must be a happy ending — after all, they’re both in the picture on the cover), but even their darkest moments here are told with great humor. The Bucolic Plague was a joy to read — a story about falling in love with a place, about loving each other, and about living a different kind of life — that never gets too sappy. Josh always has a story about his drag queen days or one of Martha’s parties to keep me laughing.

Some of you may remember the reality series, “The Fabulous Beekman Boys”, which documented their adventures in running a farm and a business. For more information on their brand, check out Beekman1802.com — full of videos and pictures and recipes, as well as the Beekman Mercantile. And for more about Josh’s earlier exploits, check out his first memoir, I Am Not Myself These Days

My copy of The Bucolic Plague: How Two Manhattanites Became Gentlemen Farmers

was an Advanced Reader Copy, provided free of charge. It is available as of today, June 1, 2010.

1 comment for “Review: The Bucolic Plague by Josh Kilmer-Purcell”