Review: The Lost and Forgotten Languages of Shanghai by Ruiyan Xu 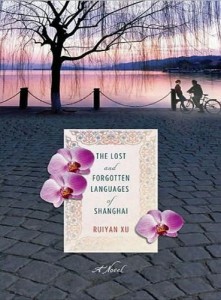 The Lost and Forgotten Languages of Shanghai by Ruiyan Xu is all about isolation and communication.

Li Jing is a Chinese businessman with a beautiful wife and son, a successful investment company, family and friends.  But in one tragic instant, he finds himself cut off from everything.  A gas leak, an explosion, and a flying sheet of glass change his world forever.  He is having dinner with his father at the Swan Hotel when an explosion rips through the building.  In the midst of the aftershocks, he is hit by a falling pane of glass.  The resulting brain damage causes him to forget how to speak Chinese.  He can still understand the language, but the tones, the sounds, the words are all gone.  By an odd twist, he can speak English, a language he had nearly forgotten; he lived with his father in Virginia until he was about 10 years old.  When they moved back to China, he struggled to learn Chinese, but kids are resilient and their brains are still developing.  Now the damage is done.

Li Jing’s isolation was almost physically painful to read.  He loves his wife, but he can’t speak to her.  He wants to comfort his son, who has been terribly frightened by the injuries to his father and grandfather, but he can’t make himself understood.  His business depends on his ability to network, to court clients, to pick up and sift through bits of information and rumor, in order to make investment decisions.  He is horrified by the sound of his halting, mispronounced Chinese and retreats into himself, refusing to speak to the doctors or his family.

The struggle is even more painful for his wife, Meiling.  The burden of maintaining the illusion of an ordinary life falls to her.  She deals with the friends and colleagues who want to visit, but must be prevented from learning the extent of her husband’s injuries.  She cares for her father-in-law, her frightened son, with little time for herself.  She worries about her husband’s business and her own job, and through it all she must keep a calm, serene front.

Eventually, the hospital brings in Rosalyn Neal, an American doctor who specializes in aphasia and language disorders.  She speaks no Chinese, but the hope is that she can improve his English skills, evaluate his progress, and guide the other doctors in ways to improve his halting Chinese.  Rosalyn is in the midst of a divorce; she is lonely and unhappy, and escaping to Shanghai seems like a solution to all her problems.  Instead, she finds herself in a country where she doesn’t understand the rules or customs, where she requires a translator for even the simplest transactions, leaving her even more alone than before.

I read The Lost and Forgotten Languages of Shanghai while on a business trip in the Netherlands, and it resonated very strongly with me.  Even though most of my Dutch colleagues speak excellent English, it is still isolating — they will occasionally lapse into Dutch during difficult parts of a discussion or talk amongst themselves during breaks, unintentionally excluding me from the conversation.  It becomes embarrassing to ask for English menus and to not be able to pronounce the names of streets correctly.  You long for one meal that is not an ordeal of deciphering menus and looking for something familiar.  So Rosalyn and Ji Ling’s struggles seemed very real to me.

The book is haunting; sad and lovely.  The descriptions of Shanghai are vibrant and alive.  Meiling’s fear and pain are so clear — her desperate struggle to hold her family together, to save face, to appear calm and unruffled on the surface when she is terrified and angry on the inside.  And poor Rosalyn!  I understood her suffering, as well as her relief when she falls in with a group of ex-pats who can show her the ropes.  She walks a fine line between her old life and her new, between her professional responsibilities and her girlish glee at being unfettered in a strange new city.  I wanted to comfort each character, to hold their hands and reassure them.  I found myself completely caught up in their stories, the sign of a truly effective novel.

I received my copy of The Lost and Forgotten Languages of Shanghai through the Early Reviewer program at LibraryThing.com.  It is scheduled for release in October, 2010.

3 comments for “Review: The Lost and Forgotten Languages of Shanghai by Ruiyan Xu”