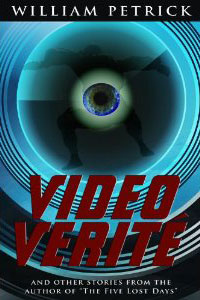 Video Verite is a selection of short stories that explores our connection to the media.  Our lives are filled with images, but not all of them are real.  In a culture overrun with advertising, reality shows and celebrities famous for getting their faces on tv, how do we know what is truth and what is fiction?

William Petrick’s stories touch on various aspects of media culture, although the connection was not always clear to me.  In “Turn Around,” a couple in the midst of splitting up head to the airport, while in “Perfect View,” a little vacation rock-climbing has the potential for tragedy.  Others are more clearly connected — in “Video Verite,” “Sins of the Father” and “Shooting Harlem” there are definite connections to television and video and the truth of what we see on the screen.

Some of the stories are quite interesting.  “The Captain” is the story of a military man trying to do the right thing.  “Perfect View” has Paul stomping off to prove a point (and nearly get himself killed in the process), while poor, clueless Amy sits idly by, sketching.  These were quick reads, short enough to finish the book on the flight between Cleveland and Newark (1 hour, 20 minutes – I know that flight well).

The trend these days seems to be to smaller books – this one is less than 140 pages.  The stories themselves are very short, some only 3 or 4 pages long.  It all lends to the feeling that the book is somehow incomplete.  Many of the stories felt unfinished to me.  For example, in “Shooting Harlem,” a producer is sent to film the story of a young black girl who has received an important scholarship.  The news team is looking for a particular kind of story – poverty, depression, an escape from the ghetto.  When they don’t get that story, when they find a nice, middle-class family, they’re at a loss to know what to do.  That’s interesting, so far.  But then the producer just walks away, goes back to his newsroom.  What did he learn?  Did he confront his prejudice?  Was it shared by his colleagues?  No answers to those questions, and those were the ones that interested me.

The book also paints an unattractive portrait of women.  There is only one story told from a female point of view (and that woman is more than a bit nuts), and it ends with everyone in handcuffs.  There are bitter ex-wives, women nagging men to talk about their feelings, resentful girlfriends who don’t want their fellas to go out with the boys.  A pretty tired stereotype, in my opinion.

Video Verite and Other Stories

is the second published work by William Petrick, an Emmy Award winning documentary producer and director.  My copy was a review copy, provided free of charge.