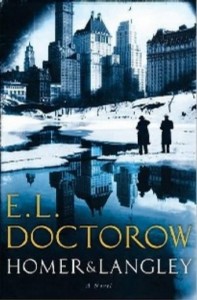 by E.L. Doctorow is a fictionalized telling of the story of the Collyer brothers — two eccentric New York brothers from a wealthy family, living in a spacious brownstone on 5th Avenue.  They became famous, not for their wealth or their looks or their philanthropy, but for their compulsive hoarding.  It’s a tragic story and Doctorow’s fictionalized account is compelling reading, trying to give some background and insight into the lives of these famous recluses.

Homer and Langley Collyer were born in the early 1880’s.  Their father, Herman, was a well-known doctor; their mother, Susie, a former opera singer.  They lived privileged lives in a splendid three-story brownstone on 5th Avenue in New York City, across from Central Park.  Homer was a gifted pianist and played all his life, even though he lost his sight as a teenager.  Langley was a soldier in World War I, discharged after he was wounded, exposed to mustard gas.  He came home to find that both of his parents had died of the Spanish Flu and his blind younger brother was running the household.

Over the years, Langley’s eccentricities began to worsen.  He collected newspapers, buying every edition sold in the city every day, morning and evening, and then clipping and sorting the articles as part of his plan to create a singular newspaper edition that covered all the stories every likely to be told.  He could not buy one of anything: when Homer needed a typewriter, Langley bought a dozen different brands for him to try. He scavenged the city, looking for bits and pieces that he could incorporate into his grand designs.  With each setback — the loss of a girlfriend, the death of their longtime housekeeper, a run-in with city employees — his paranoia becomes deeper and his compulsions more dangerous.

Homer is a hostage to his brother’s lunacy, although he seems content.  Their world, always rather insulated, begins to shrink until they are all alone in their boarded up house.  They have no phone, no electricity, no water — once a week, they wheel 2 baby carriages to an old horse pump at the end of the block.  Everyone eventually leaves them.  Their long-time housekeeper, Siobahn, dies.  Their cook brings her son to live with them and for a while, Homer is immersed in the world of Harlem jazz clubs, but that also comes to a tragic end.  The replacement housekeepers, the troupe of hippies who moves in for a time, a reporter that Homer meets in the park – everyone, eventually, falls away.  Leaving the brothers to be buried under mountains of newspapers, books, car parts, folding chairs, typewriters, pianos, baby carriages and broken furniture. 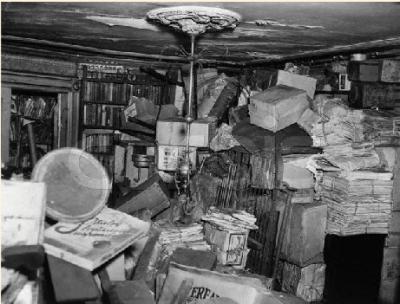 Homer and Langley is a very fictionalized account and I am not sure I understand all the liberties Doctorow took.  He reversed the brothers’ birth order (Homer was actually the elder).  According to Wikipedia, Langley was the pianist in the family.  The brothers actually died in 1947, although in the novel, they live into the 1970’s.  Those changes aside, the book is a fascinating look at their descent into madness.   Doctorow does an excellent job of filling in the gaps, painting a mural of what their lives might have been like, the justifications, the crazy theories, the way that Homer is slowly drawn in by his brother’s mental disorder.

When police finally cleaned out the Collyer mansion, they pulled 130 tons of trash out onto 5th Avenue.  Although the brothers had substantial savings and investments, they lived in squalor, without basic utilities.  The salvageable items brought only $2,000 at auction.

I admit that I am obsessed with shows like Hoarders.  I am a terrible packrat (inherited that from my father), and I find that I have difficulty letting go of things.  I’ve read several books on organizing and decluttering your house, but the easy organization tips never address the root of the problem, why you gather things and why you find it hard to let them go.  I think I’ll be putting these pictures on my refrigerator as a reminder.

My copy of Homer & Langley

was a Christmas gift from my sister.

1 comment for “Review: Homer and Langley by E.L. Doctorow”