Review: The Mistress of Abha by William Newton 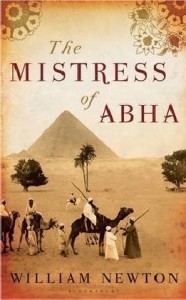 In The Mistress of Abha

by William Newton, Ivor Willoughby goes searching for the father he barely knew.  A British soldier stationed in Arabia, Ivor met his father, Robert, on only 2 occasions and for only a handful of days in total, but Robert was a legend in their household and beyond.  Ivor is determined, from a very young age, to go to Arabia for himself and see the land that so enthralled his father.  His father’s legend, the story of Ullobi, is not at all what he imagined.  It’s much, much more.

The Mistress of Abha is a dense story, full of detail and description — everything from the type of car Robert Willoughby drove when he was seducing the young ladies of Oxfordshire to the sounds and smells of the Arabian markets that Ivor explores, looking for someone with the information he seeks.  If you’re someone who likes to get right to the heart of the story, get right to the action, pass this by; you’ll just be frustrated.  The first third of the book is spent setting up Ivor’s trip to Arabia: his father’s courtship of his mother, his childhood, his education.  Then the story changes, as Ivor meets Etza, a former slave who may hold the key to his father’s whereabouts.

Ivor starts out in true British style, believing he will go to Arabia (as an officer in the Royal Navy’s Locust Bureau, a job that allows him a great deal of freedom of movement), ask a few questions and easily track down his missing father.  After all, his father is a legend — all the officers who spoke of him said so!  The reality is very different.  The Arabia he visits can’t help but be a a bit disappointing, after his years of dreams and fantasies.  Robert may be a legend in the British Army, but he is not as well-known to the locals as Ivor hoped.  He much follow a much more circuitous path to track down the story, which eventually leads him to Etza and the story of Na’ema.

The book is full of wonderful detail, but it’s not a travelogue and it might not be the Middle East as we would recognize it today.  It is still under British influence, but as full of complex and twisting politics as it is today.  Ivor is an idealistic young man from a wealthy family with a job that affords him a great deal of leisure.  He travels across Arabia, occasionally making a few notes on some locusts, but mostly engrossed in his search.  He is set upon by marauders, captured, injured, feasted and treated as an honored guest, so it is never a boring trip, for Ivor or his readers.

My copy of The Mistress of Abha

was provided by the LibraryThing Early Reviewers Program.

2 comments for “Review: The Mistress of Abha by William Newton”