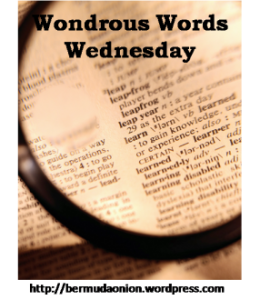 It’s Wednesday and I have some words!  This week I am reading Corrag, a story about an English witch accused of a massacre.  An excellent story so far, but there are a lot of Gaelic words that I’ve had to check on:

“It has the smell of a byre — dung and dampness.”

2. Jeddart’s Justice: where a man is hanged first and tried afterwards, which arose from a case in Jedburgh, Scotland

“The gaol hissed it to her — or at least, man’s meaning of it, which was Jeddart’s justice, mostly.”

3. Teasel:  a biennial plant with a tall stem, prickly leaves and purple flowers

“When I said a bad word against her, she put a teasel in my mouth and said chew, so that I’d learn the soreness of such words.”

4. Braes: a slope or hillside

“But I thought of them both, up on the braes.”

5. Curraichd: a linen kerchief, fastened under the chin

“…two women were whispering with linen curraichd on their heads, and Iain was kissing a rosy girl by the fire…”

“There were bannocks and barley-cakes and cheese and atholl brose.”

“He rubbed the heel of his cuaran into the ground.”

9. Glaistrig: a solitary supernatural being of the Scottish Highlands, with the upper half of a woman and the lower half of a goat

That’s a lot for this week, and I’ve still got 100 pages to go!  Check back next week for the review!