Review: The Grand Design by Stephen Hawking and Leonard Mlodinow 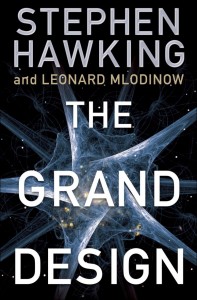 Here’s a tip: driving through downtown Chicago traffic is not the time to try and absorb the details of quantum physics. Dangerous stuff, that. The Grand Design

is part history, part philosophy, part science. It goes back to Ptolemy and Plato, forward to the probable end of the universe. It strives to answer the great questions of life:

“How can we understand the world in which we find ourselves? How does the universe behave? What is the nature of reality? Where does all this come from? Did the universe need a creator?”

Those are weighty questions and a tall order for any book. Of course, there are no concrete answers, but modern science has made a lot of progress, despite those who would hold it back. This book was a fascinating look at one of the approaches to the answers.

I will be the first to tell you that I didn’t understand all of this. (And you know how I’m always saying that some books are better as audiobooks? This one was not. It would have helped me to be able to read and re-read some of these sections, until the lightbulb came on. Tough to do in the car, especially in Chicago traffic.) I did come away with a better understanding of the way the current theories have developed. Looking at the ways that earlier theories morphed into different systems, were influenced by the political and philosophical beliefs of the time, and evolved into our modern sciences was illuminating. I feel like a little more conversant in those theories. I won’t be teaching any graduate-level physics courses, but if — at a cocktail party, let’s say — someone starts throwing out terms like boundary conditions and probability amplitudes, then I can come up with a bit of witty banter about multiverses and excuse myself to grab another cocktail.

This book is funny. From the very first chapter and its shout out to Douglas Adams and The Hitchhiker’s Guide to the Galaxy, it’s obvious that these two authors are serious, but not somber.

The humorous examples give your brain a bit of a break from some weighty subject matter. It helps, and they keep you going even when you’re pretty sure you’ve lost the thread of the discussion. I am still better off and better informed for having read it, and I think eventually I will pick it up in print, see if reading it on the page helps me parse it a little better. Until then, I will console myself with the fact that ground-breaking American physicist Richard Feynman once said, “I think I can safely say that nobody understands quantum mechanics.” At least I’m in good company.

My copy of The Grand Design

by Stephen Hawking and Leonard Mlodinow has been returned to the Kent Free Library.

Teaser Tuesday!
It was a dark and stormy night…

1 comment for “Review: The Grand Design by Stephen Hawking and Leonard Mlodinow”