Monday Shmoop: Endurance as a virtue in The Scarlett Letter, Antigone and To Kill a Mockingbird quotes 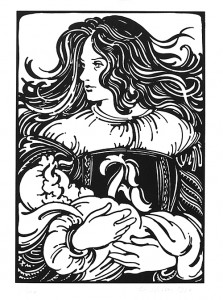 Endurance is a virtue that we, as a Westernized society, place a great deal of worth in. To withstand intense pain, strife or just plain unpleasantness—or even muster up the strength to resist an endlessly tempting pint of Ben & Jerry’s Chubby Hubby—is to be respected, appreciated and at times, worshipped. History is littered with examples of those elevated super-humans who demonstrated the capacity to grin and bear it while turning the other cheek. Think Jesus, Mohammad, Buddha or even the countless Christian saints revered for their storied sacrifice and strength.

It should be no surprise that our reverence for those who endure has found its way into our story telling. Tales of strength, daunting and physically excruciating tasks and the ability to overcome the odds are the stuff that defines our heroes. More importantly, these sort of tales also define humanity as a whole. They represent not only our values and our morals as mere humans, but they also construct social norms and rules that shape our societies. Again, religious figures such as Jesus and Buddha come to mind, whose teachings have shaped our perceptions of how we as humans should act for thousands of years. Consider the Golden Rule—a virtue present in nearly every religion that urges people to treat others as they would like to be treated—as a sort of test of endurance. Especially when you’re in line for the DMV. That bitter (and completely justifiable) attitude is only going to get you more bitterness.

A classic literary example of valued endurance, especially with religious connotations, is Nathanial Hawthorne’s The Scarlet Letter in which Hester Prynne, a young woman living in mid-17th century puritanical Massachusetts Bay Colony area, is publicly punished and shamed for having a child with someone who is clearly not her husband, since the dude has been MIA for a few years. As part of her punishment, she is forced to wear the letter “A” to forever mark her as an adulterer. Yet, despite her imprisonment, constant public shaming and general disenfranchisement, Hester endures. A woman of honor, she does not public reveal who her baby daddy is (it’s the town minister, by the way) to protect him and his reputation. Her love for the minister gives meaning and purpose to her suffering, making her a patient and relatively tolerant literary figure with religious overtones.

Another notable female figure of endurance is Antigone, Sophocle’s famous play about a young noble woman whose morals and do-right attitude prompts her to defy the king’s irrational decree that banned the proper burial of her traitorous brother. Her courage and gall is what largely defines her ability to endure, refusing to back down or out her sister as an accomplice while standing before the king. Though she does kill herself off stage while in prison, Sophocles’ implies that her action was not out of fear or desperation but it was yet another way to defy and thwart the tyrannical king. That level of commitment and bravery is akin to the virtues contained in our human capacity to endure, often going hand in hand.

The trope of female endurance is also not lost on Harper Lee, who created Scout, a tough tomboy character who learns that with femininity comes great strength and an undeniable ability to endure trying times. In one of the To Kill a Mockingbird quotes, Scout finds that her Aunt Alexandra’s insistence on maintaining polite hospitality in light of the tragic death of Tom is in fact an attribute of endurance and strength rather than being a hypocritical or insensitive display. Scout says: “Aunt Alexandra looked across the room at me and smiled. She looked at a tray of cookies on the table and nodded at them. I carefully picked up the tray and watched myself walk to Mrs. Merriweather. With my best company manners, I asked her if she would have some. After all, if Aunty could be a lady at a time like this, so could I.”

Our stories show us humans to carry on and endure in hard times. After all, it’s what makes us human.

Shmoop offers hundreds of free educational guides and references.  We believe that any topic, like Scarlet Letter or Antigone, can be broken down in a way that is relatable and fun for students. . . We keep things more interesting by using television shows, video games, music, and fashion references throughout our guides. Our goal is not only to present the fundamentals, but to bring the material to life in a way that makes students ask more questions, instead of less.  Check out Shmoop’s website to see how all of our free resources can make a difference in your study time.