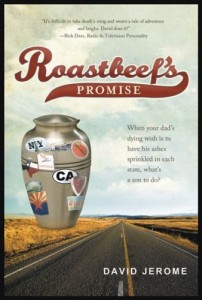 What do you want your loved ones to do with your body when you die? I’ve actually had this conversation with my family; both my parents want to be cremated. I also want to be cremated, and though I’m not entirely certain what I want to do with my ashes, I hate the thought of them sitting in an urn on someone’s mantle.  So I liked the premise behind Roastbeef’s Promise

: Roastbeef’s father has died and he wants his son to sprinkle his ashes in each of the contiguous 48 states. One helluva road trip, with Dad’s urn in tow.

The rest of the family is not entirely down with this idea, but Roastbeef (born Jim) decides to drop out of college, take his beat-up car and hit the road. In theory, hilarity will ensue.

Roastbeef eventually hits every state. He also gets injured, arrested, his vehicle stolen, his dignity dented. He sleeps in the car, he sleeps in a frat house, he plays boyfriend for a closeted lesbian headed home for a visit with her family. He plays the King of International Week, has his story is told over the loudspeaker at a stock car race, and he gives away a pregnant bride in a classic Las Vegas wedding. At the end, he finds that he has wandered into a new and lucrative career.

This isn’t a true story, by the way. It sounded to me like the sort of thing that would make a great memoir, but in a memoir, you’re stuck with what actually happened. You can forgive the author if their life doesn’t strike exactly the right balance between hilarity and seriousness. This book has no such excuse. Everything is over the top. When Roastbeef is hitchhiking, he doesn’t just get a ride from some drunken frat boys. He gets a ride, they take him home, he stays for a week, sleeping on the couch and helping them get ready for International Night. They make him the King of International Night — which is quite the wild, drunken revel — he jumps off a second floor balcony and ends up leaving with a van full of sorority girls who promptly get him arrested. It’s too exhausting to be any fun.

One thing that bothered me was that Roastbeef never really seems to spend much time thinking about his dad. I’d like to think that if I was travelling the country, sprinkling my father’s ashes, fulfilling his final request, I’d have some moments of introspection — I’d think about him a little. It’s like a National Lampoon Road Trip movie, with a crematory urn. Not my sense of humor at all. I guess I expected a little less slapstick and a little more thoughtfulness.

My copy of Roastbeef’s Promise