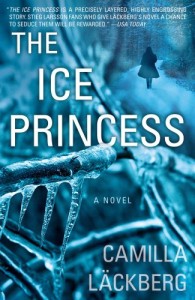 I had a crisis a few weeks ago. I was on an airplane, diverted from my original destination, and I didn’t pack a back-up book. Luckily, we eventually got off the plane in Indianapolis, and I picked up The Ice Princess

by Camilla Läckberg in the airport bookstore. (I admit that I picked it up because I liked the cover and I’ve been reading some Scandinavian authors lately, so it fit the bill.)  More than entertaining enough to keep me engrossed all the way to Chicago.

The theme of the book seems to be cold. Even the corpse that starts the story is frozen.

“Mercifully, the corpse’s eyes were shut, but the lips were bright blue. A thin film of ice had formed around the torso, hiding the lower half of the body completely…The knees also stuck up through the frozen surface. Alex’s long blonde hair was spread like a fan over the end of the tub but looked brittle and frozen in the cold.”

Author Erica Falck comes to the aid of the old man who finds the body. Alex is an old friend of hers — once her very best friend, and she has never really known what caused the rift that developed between them. Erica has made a name for herself writing biographies and she has come home to the small town of Fjällbacka after the death of her parents, to deal with their estate.

“Erica stepped carefully through the snow covering the rocks. She had felt a great need to get a little fresh air, and here from Badholmen she had an uninterrupted view of the islands and the seemingly endless white ice.”

This is really a fabulous mystery! There are so many twists and turns and misdirections that it keeps you guessing all the way through. There’s the murder mystery — who killed Alexandra Wijkner? Who is the mystery man she was involved with? There’s the backstory — is this related to whatever made Alex pull away from Erica back in their school days, and made Alex’s parents move away? There are other names cropping up — are they involved? Even Erica’s love life and her complicated family situation play into the story.

“The shocking story had touched him deeply, but at the same time he had felt a deep professional satisfaction when the pieces of the puzzle one by one fell into place. So many questions had been answered this afternoon. Yet now he felt an even greater frustration than before. He had found the explanation for so much, but he was still fumbling in the dark…”

My copy of The Ice Princess

came from my personal library, thanks to the Indianapolis International Airport. For more about author Camilla Läckberg and her work, check out her website.

3 comments for “Review: The Ice Princess by Camilla Lackberg”