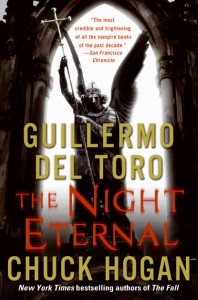 Oh, was I excited to get this book! I loved the first book in the series, The Strain — recommended it to everyone who was tired of sparkly vampires. The Fall was a little less successful (often the case with the middle book in a series), but still a very good read. I have been anxiously awaiting the final installment, in part because I figure the movie can’t be far behind.

begins two years after The Fall ends. The Master has orchestrated the end of the human race and instituted a new vampire world order. There are still humans around; after all, the vampires could not survive without them; but most of them are completely subjugated. The size of the vampire population is closely controlled, so that it does not outstrip the available humans, and some of the surviving humans are similarly monitored. (Let’s just say that having B-positive blood is not a good thing.) The Master has used his psychic connection to the vampires he created to control the human population, which lives in nearly perpetual darkness thanks to the nuclear holocaust of the last book.

Ephraim Goodweather, Nora Martinez, Vasily Fet and Gus Elizade are still fighting the good fight. They have ways of undermining the Master and at the same time, they are working to discover the secret of the Occido Lumen, the book that holds the secret of the Master’s origins. In The Fall, the Master destroyed the other Ancients by destroying their birthplace, the site where they first rose as vampires. The book holds clues, but they are subtle and complex, and they will not reveal themselves easily.

Ephraim is not much good to his colleagues these days. He is obsessed with the fate of his son, Zach, who was captured by his mother, a vampire working closely with the Master. He is unstable and unreliable, but still part of the key to the mystery.

Del Toro and Hogan do an interesting job of weaving vampire mythology and Old Testament stories to create a really original vampire canon. Their vampires are unlike any others in recent memory. And they are not afraid to take the story to the extreme — in The Fall, they call down a nuclear holocaust — to see the story through. This third book is full of plot twists, unlikely allies and surprising enemies. In some ways, the book went far further than I expected, and I love a book that can truly surprise me. This is full of action and suspense and heartbreak; it’s a terrific end to the series.

All the same, I have to say that I hope this isn’t exactly the end. I thought from the very first scene in The Strain that this would make a great movie. The Strain has so much atmosphere and is so visual that you can almost see the movie in your ahead. (Exactly the sort of novel I would expect from such a great director.) There’s a lot of great material here that I believe would be great on the big screen. At least, a girl can dream…

My copy of The Night Eternal was a review copy provided free of charge by the publisher.

3 comments for “Review: The Night Eternal by Guillermo del Toro and Chuck Hogan”